Colleagues and listeners have been paying tribute to Academy FM Thanet local news reader Paddy Earp, who has died after a short illness.

Paddy was rushed to Queen Elizabeth the Queen Mother Hospital in Margate last weekend after suffering a serious stroke. He died in the early hours of this morning (April 23). He was in his early 70s.

Station manager Bob Mower said: “Paddy was a tremendous asset to Academy FM. He brought wisdom and humour to our news service, and he was popular with all of us, because he was such a friendly and likeable guy.

“We’re really going to miss him, and our sympathies go to his family for their loss.” 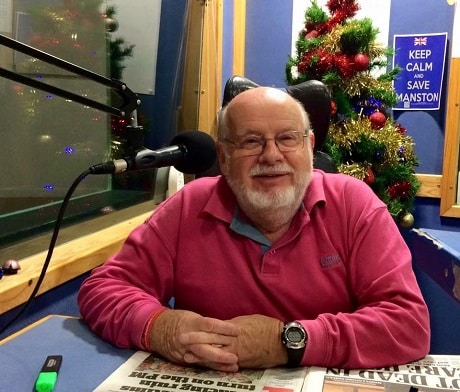 Presenter and trustee Doc Atherton added: “Paddy was a big supporter of Academy FM and all the team. As one of my colleagues put it, he was like a mixture of a cuddly teddy bear and a favourite uncle.

“He was a true gent who will be sorely missed by anyone who had their life enhanced by meeting him.”

Dad-of-two Paddy, who lived in Broadstairs, had a distinguished career as an Army captain and then in civilian life he worked in the specialist recruitment sector, as well as being a tour manager for many battlefield tours.

Former colleague Tom Brooks, now working as a motorsport commentator, summed up:  “Paddy was a delight to know and work with and guaranteed to put a smile on your face.

“He inspired me to push further in my career. Thank you, Paddy, for everything”.