I’ve had a rather productive weekend, readers; I’ve been shopping for fancy dress. I don’t often shop, I should say, because I find myself tuning out after the first 30 seconds or so, but this was different; this was for a specific cause.

I’m something of a fancy dress fan, I have to say; I don’t need much convincing, but this is for a good reason. I’ve written before about the upcoming marathon I’m taking part in with my friend Diana (well, we’re taking part in three, but I won’t get too carried away), and as I write this, we’re just under three weeks away from the start.

Walk the Walk is a grant-making charity dedicated to funding scientific research into curing cancer; a worthwhile cause, I’m sure, in anyone’s book. It’s been going for 20 years now, and this will be the fourth time Di and I have taken part as a team.

We did the first year pretty “straight”, not really dressing up – we didn’t know what the rules were, so decided to play it cautiously. Funnily enough, I’ve just looked back at the photos from that year, and my memory seems to have been a bit skewed; take a look at this photo … 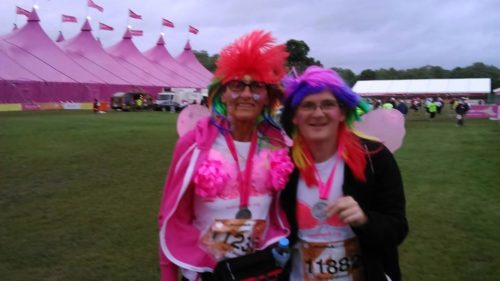 Okay, we dressed up a little bit.

We found our feet after that, so the next year, we decided to go with the theme the Moonwalk itself had decreed; movie stars. Now, I think it’s fair to say that neither of us look like anyone famous, but we gave it the good old rugby try. This picture doesn’t do us justice, but can you tell who we were? 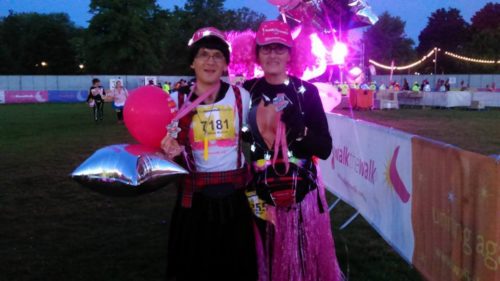 Last year was possibly the quintessential moment, however, when we decided to get into the carnival theme by dressing up as clowns. 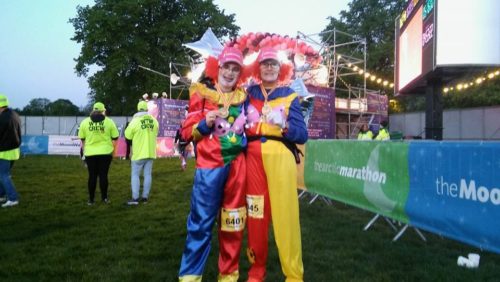 What I found fascinating was just how many people are scared of clowns. I was shocked at the number of fellow walkers who screamed when they saw us approaching; I mean, it’s not an entirely uncommon reaction for me, but clowns are meant to be fun, not scary. Except for that clown in Stephen King’s “It”; I can’t walk past a drain cover even now without eyeing it warily.

This year, however, the theme is an intriguing one; the 1920s. A lot of people have decorated their bras with decorative material (oh yes, a lot of people walk the route with just their bras up top – not us, though; not for all the tea in China), but we’re not going down that route. Di and I have chosen a rather innovative theme for the walk, which is in just three weeks time.

What is it? Well, it’s meant to be top-secret, so I really should wait until after the walk to share this with you, but oh – alright then, since you asked so nicely. My costume is…

Oh damn, I’ve run out of space in the column. Curses. Oh well, looks like you’ll have to wait and see after all!