You may know him as the guy who works at the Shell garage in Birchington or the fella who is always popping up at events with his photography kit.

But Paul Holton, from Margate, has a whole other life as a manager, promoter and social media expert in the music and acting industries.

The 40-year-old, who has had his day job at the garage for 11 years, has worked with stars including Olly Murs, The Vamps, Bryan Adams, McFly, The Osmonds and urban artists Dappy and Stormzy. 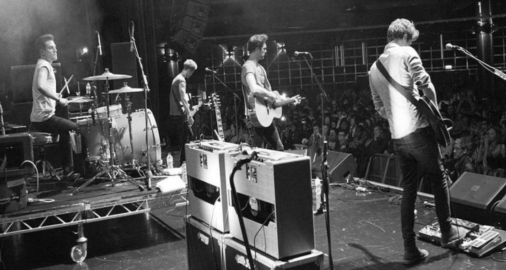 Paul, from Margate, started out in the music industry 18 years ago and has toured the country with acts, worked at festivals and managed rising stars.

The former cadet training corp member, who taught youngsters aged 11-18 in military subjects, says  in recent years his career has taken him to Wembley Arena and the O2, spending time with stars including three-days on the road with singer Olly Murs where Paul was in charge of gig photography.

He also designs websites and, since 2010, has been involved with CUP Promotions, the organisers of the largest celebrity sporting tournaments in the world. The Soccer Six events consist of a mixture of a sporting tournament and live performances.

Paul said: “I started out as their official photographer, moving on to run the media team and helping with their online social media. I now work behind the scenes assisting with the radio and TV platforms, as well as working at the events.”

One of Paul’s roles is as manager to teen singer, songwriter and guitarist Cal Turner. The Essex lad has recently performed at the after-party of the Hoops Aid event at the 02 and is due to be one of the singers performing around the country with the Alstar Music EP tour kicking off this month.

The former Hartsdown student also manages up-coming actor Jack Sims who is one of the stars of A Surburban Fairytale – a horror movie directed by James Crow and starring Vicki Michelle of ‘Allo ‘Allo fame. The film, that was shot in Kent, is due for release this year.

Paul said: “My main passion was photography and then there was also a passion for music. Every Saturday night I used to go to the Westgate social club to listen to the bands and help them set up their equipment.

“The past three years have been really busy with two movies, countless VIP events and lots of travelling.

“I have met lots of people, Olly Murs is really down to earth and Dappy is a bit of a rascal although I was surprised that he talks quite posh.

“I’ve also worked with The Osmonds, Status Quo and do a lot of stuff with the management for The Vamps. I do social media and work with Pop Scoop, Press Party and Maximum Music.

“But Margate is my hometown. I love the seaside, fresh air and community, it’s great, I’ve worked with a lot of celebrities and talent but Thanet keeps me grounded, especially staying at my mum’s when I am in Margate and doing my ‘day job’ at the garage.”

Find out more about Paul, Cal and Jack here