Kent Police officers have released an efit of a female they want to talk to after a woman in her 80s was the victim of a distraction burglary in Ramsgate.

Between 12.30pm and 5pm on Thursday 30 March, the victim answered the front door to a woman who asked if gardening work was available.

Shortly after, the victim realised her handbag containing cash, bank cards and other personal items, was missing from inside the house in Northwood Road, Ramsgate.

The woman police would like to trace was described as being white, aged between 40 to 50 years old, with a spotty complexion and wearing a red jacket and grey leggings.

Officers have also released CCTV footage of a man they would like to speak to who was in the area at the time and may have information that could assist them with their enquiries. 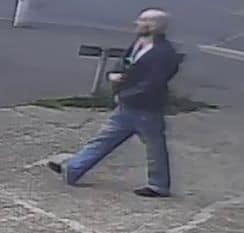 Investigating officer Detective Constable Richard Cordery said: “Due to the warm weather, the back door was left open and it is believed the handbag was taken, possibly while the victim was answering the front door.

“We ask anyone who might have seen something suspicious at the time, can provide the identity of the woman or who recognises the man, to get in contact with us as soon as possible.”