One of the UK’s last apprentice roofers, 75-year-old Chris Johnson, is among the team working on the new Wetherspoon pub on Ramsgate sea front.

The Royal Victoria Pavilion is set to open on 29 August, following a £4 million transformation of the building, in Harbour Parade.

A forklift truck fire in the building last week has not hampered opening date plans.

Wetherspoon architects and contractors are carefully restoring the Grade II listed property, working to photographs and designs, keeping as close as possible to the original concept, designed by notable architect Stanley Davenport Adshead and originally completed in 1903. 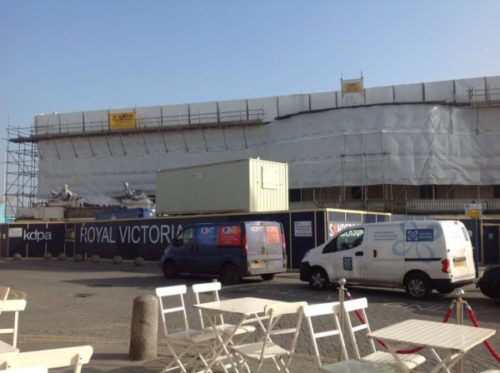 Chris is one of the roofing contractors from Full Metal Jacket, employed for the job and a specialist in his field.

He and his colleagues are metal work roofing specialists, working with stainless steel, copper and zinc, among other materials.  They have installed the zinc roof on the former pavilion, now the pub, in keeping with the original building.

The new pub design has also included the reinstatement of the dormer oriel (circular) windows, another of Chris’ skills. 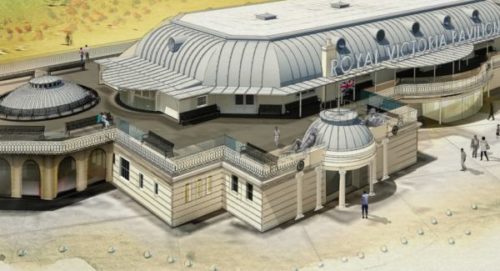 He said: “There were originally 14 dormer windows, which were all removed at some stage, but we are installing 10 new ones, which will bring the building back to what it would have looked like in the early 1900s.

“The main roof is one of the largest I have worked on in my almost 60 years, we are using the latest standing seam system and the zinc is combined with titanium, which I’m told gives it twice the life-time, so probably another 60 years!”

Chris, who will be 76 in October, was born John Chris Johnson in Northampton, when his mother was evacuated from London during the Blitz.  He was brought up in Islington, North London, near to the old Arsenal football stadium, despite being a West Ham United fan.

He started as a ‘young mate’, one of the last apprentice roofers, at the age of 15, and does not look like retiring anytime soon.

He said: “I was always interested in practical things, my second choice job was a carpenter.  I have been doing this for nearly 60 years, have always enjoyed it and that is the secret of life – if you enjoy what you do, then there are no problems.”

Chris, whose hobby these days is world travel, has previously worked on a similar project at the Worthing Pavilion, no fewer than three times.

He said: “Zinc is a very traditional material for buildings like these, although more popular on the continent.  I worked on the Worthing Pavilion in 1959, as a young 16-year-old lad, we went back in 1980 and then again in 2012, as zinc by the sea only has a 30 year life-span.”

Chris has also worked at Buckingham Palace, installing the copper roof on The Queen’s Gallery in 2001, and he worked on the ‘small pods’ at the Thames Barrier.

He said: “The job keeps me agile and doesn’t seem to tire me out.  The company won’t let me retire anyway, I’m needed for jobs like these.  What would I do with myself anyway?”