The stage and theatre seats will be replaced with hospital beds for the first show under the new owners of Cliftonville’s Tom Thumb Theatre.

Sara and Alex Ratcliffe moved from London to Margate last Summer and have now taken on the former Victorian coach house, which is one of the UK’s smallest theatres.

The pair have experience of managing entertainment venues, Alex graduated from the London Academy of Music and Dramatic Art in 1999 and has been involved in numerous projects. He is a founder member of The Fitzrovia Radio Hour -a theatre show based around 1940’s radio plays which has had several national tours and West End runs. He has also previously run several venues.

Sara moved to London from Sweden in 1997. She finished an MA at The Royal College of Art in 2008 and  then worked in fashion.

Together Alex and Sara went on to open their Swedish coffee shop Cooper & Wolf in Lower Clapton and later also ran a music venue/bar within the art centre at Hackney’s Chats Palace.

The pair take over from Jessica Jordan-Wrench and Eoin Furbank, who will remain in Margate and continue to work with their company theatre.dash.

For Alex and Sara the first show will be from Looping The Loop Spring Festival, running from April 23-May 1.

The show is Reassembled Slightly Askew, a medical drama about the artist Shannon Yee’s experience of being diagnosed and treated for a rare brain infection. 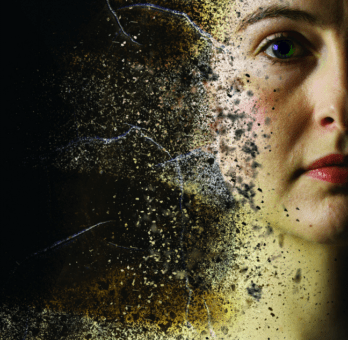 The theatre will be filled with hospital beds for the audience and a ‘medical waiting room’ back stage.

Sara said: “We see this as a perfect opportunity to have a mini arts hub within the Margate community and a platform for not only theatre but also music, comedy, art and workshops.

“We are really excited to have Looping the loop returning to The Tom Thumb and ‘Reassembled, Slightly Askew’ is a perfect first show.

“ We love the idea of playing with the space, especially as it is so limited, so removing the focus from traditional theatre conventions of the proscenium arch and filling the space with 6 hospital beds is really interesting to us.

The show is for a maximum of six audience members who will listen to the audio via headphones while lying on the hospital beds. The audio technology makes the sound three-dimensional, causing listeners to feel they are inside Shannon’s head, experiencing her descent into coma, brain surgeries, early days in the hospital and reintegration into the world with a hidden disability.

Looping the Loop is part of the Collaborative Touring Network, a partnership between 9 towns and theatre promoters across the UK. The aim is to inspire and entertain through a combination of theatre productions from Battersea Arts Centre and locally produced shows.  Ramsgate Arts is the lead promoter  in Thanet working with the Tom Thumb Theatre and freelance director Ellie Jones.