The Dutch airline had been flying from Manston for just over a year but when the announcement came that new owner Ann Gloag planned to shut down the airport KLM had no choice but to leave. 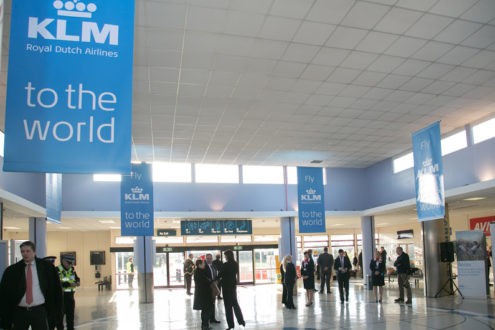 KLM  offered UK passengers 190 destinations worldwide through its hub at Schiphol – the destination from Manson. The service operated twice a day, every day of the week on a Fokker 70.

Some 48,000 passengers had been flown to and from the Schiphol hub, Amsterdam, and international destinations, from Manston during KLM’s time at the airport.

The site is currently under the ownership of Stone Hill Park.

The company submitted a masterplan to Thanet council last year containing proposals to build 2,500 homes; an advanced manufacturing focused business park; sports and recreational facilities, with the former runway becoming the focal point for a network of parkland, trails and outdoor space, and a ‘heritage hub’ at the site.

The application is due to be heard by TDC later this year.

RSP is not associated with the US RiverOak corporation originally involved in dealings to become an indemnity partner with Thanet council and then, when rejected, the firm behind the DCO to acquire the Manston site.