Funny, the sorts of things that can happen in a fairly normal week. I was thinking about my new column on Monday of this week, shortly after my first one had been published, wondering vaguely what I should write about for my second column.

Being the organised soul that I am, I’m here on Sunday afternoon (I like to leave things to the last minute) and find myself thinking the same thing. I’ve rather enjoyed my week, you see, and wanted to share it, but tried to decide how much to share – as I can’t bear reading those confessional “admit everything” tales that usually happen in the aftermath of momentous events or general elections.

You see, I’m in a very privileged position. I live in Dumpton, having just spent ten years living in Broadstairs, and it was only in the aftermath of my first column that I really appreciated how much is going on right on my doorstep.

Monday evening, I was at a yoga class in Broadstairs – I go regularly now, and it wasn’t something I’d ever considered before a few years ago. I was diagnosed with a crumbling spine which, at the time, wasn’t something that doctors could do very much about. The specialist I met suggested yoga as a way of reducing the strain on my back. Whilst dubious, I decided to recall one simple fact; the consultant clearly knew what he was talking about, whereas my educational career ended at A-Level without any specialist knowledge in medicine.

So yoga it was. I had a recommendation as to which studio was going to be the one for me – Yoga-Is in Broadstairs, in case you were wondering – and after I’d convinced a friend to come and join me for moral support, I went along. Well, under the expert ministrations of Alan and Glenys, it turns out that both Diana and I love the classes and have been going ever since. It’s helped my back, allowed me the opportunity to meet new people, and given me a real sense of awareness about how far I can stretch my body – slightly more than I expected I’d be able to.

So I’m very fortunate to live in an area where that kind of choice and expertise is available, and I could leave it there, of course, but there was still more to come this week.

I lunched with a friend at a new venue on Tuesday – well, new to me, as it turns out that Coco Latino has actually been open for the past three years; I’ve never just known about it. Meeting up with my friend Liz there at her suggestion, we had a very wide-ranging discussion that led me to finding out something particularly interesting; there are a group of witches living in Ramsgate. No, really, there are.

Now I’m not going to cast aspersions (or even spells) over anyone’s views of the world, especially so early on in my column-writing career, but suffice to say they are, by all accounts, a very friendly, welcoming group of people. I was, however, disappointed to find out that they don’t have a website; I wish they did, very genuinely, but I guess there are more important demands on their time. If any of the witches are reading this, please get in touch; I would be genuinely fascinated to learn how and why they do whatever they do.

So there’s two intriguing points to the week without even needing to draw breath. I was further intrigued by some of the local venues in the area after a stroll round the three major towns in preparation for a marathon I’m doing in the next couple of months (more on that another day). I’m talking specifically here about arts venues, and I counted eight major venues that I immediately recognised. In case you were wondering, they were;

I was bowled over by that number of arts venues (and I might have missed some out) in a district of 130,000+ people. I probably droned on about it for quite a while to my walking buddy that day, as she looked like she’d tuned out for a while and seemed surprised when we reached her car again. Still, that’s a whole other story.

Talking of arts venues, we get some very good names into the local area; I went to the Theatre Royal on Friday evening to watch Gary Delaney, a comedian well-known for his turn on Mock the Week and other programmes I’ve never heard of and so can’t be bothered to mention here. He’d one of those quick-fire comedians who seem to retain the joke equivalent of the Encyclopedia Britannica in his head, whereas I struggle to remember what I need to buy for my dinner that night. 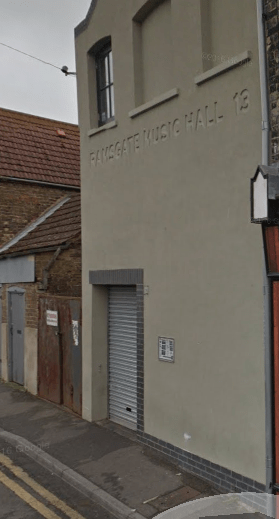 For theatres outside London to attract decent names is a reasonable achievement and, despite my shame that I’ve never actually been inside it, I’m told that the Ramsgate Music Hall attracts some really good names to it. My friend Kirk, who is something of a music aficionado (in the same way that Beethoven was a bit of a pianist), assures me that the Hall attracts some very high-quality acts on a consistent basis, and we must support this type of independent venue. That’s why I often go to the Carlton Cinema over the Vue, because it’s independent, friendly, and cheap. Cheap is good in this context.

So, a snapshot of my week; I also managed to get quite a bit of work done in between all of this, which is a relief. The fact that there’s also a flourishing creative scene in Thanet is the subject of another column, but I’ve got the good fortune to play a small part of that; keep an eye out for it, and also relish the fact that there’s so much to do in Thanet. You just need to know where to look.