A Ramsgate trucker who drove his lorry for 10 hours despite horrific burns to his legs and side has issued a plea for people to use camping stoves responsibly.

Kevin Abrahams, from Auckland Avenue, is desperate to highlight the dangers of using the gas canister stoves in confined places after his legs were engulfed in a ball of flame in a freak accident inside his lorry cab.

The former soldier, who shares five children with wife Maria, was injured last month during a trip to Glasgow to make a delivery.

The 51-year-old said: “I own my own lorry and had a delivery in Glasgow for 8am on the Monday morning (February 20). I went up on the Sunday night.

“I parked up and when I woke up at 7am the next morning I put on my little gas burner stove, I have a microwave in the lorry but it wasn’t working.

“I had it on the passenger seat and was heating up some water so I could have a wash and make a cup of tea. There is a cupboard above the seat with my wash kit in and I forgot that I had bought a new aerosol can and hadn’t put it in the bag.

“Without thinking I opened the cupboard, the aerosol rolled out, fell and clipped the gas stove. That pierced it and because it is pressurised it just turned into a fireball. It fell in the footwell, which is why it caught my legs. It happened in an instant, it was like a flame thrower.”

Kevin leapt out of the lorry dressed in just his underwear but then had to go back inside to chuck the stove and the aerosol outside to stop the fire spreading through the vehicle.

He said: “All I remember is I literally chucked the gas burner out before everything went up. It was do that or lose my lorry.”

Despite severe burns Kevin got dressed, made his delivery and drove the ten hour journey home – even stopping to get KFC in case he didn’t have time to eat before going to a hospital.

He said: “I didn’t realise how bad it was. I just wanted to get home. I didn’t want to go to a hospital in Scotland, miles from my family.”

Maria, 50, knew Kevin had suffered burns and had arranged for her daughter Kerryanne to come over and sit with Sarah and Suzie who the couple look after full-time as support carers.

But when Kevin got home and took off his jeans the seriousness of the injuries became apparent. 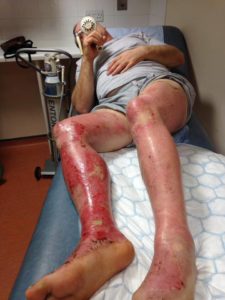 Maria said: “My daughter looked and said ‘we have to call an ambulance now.’”

Ambulance crews arrived within five minutes and blue-lighted Kevin the William Harvey Hospital at Ashford. He was put on a drip and morphine and WHH nurses arranged for him to be taken to the East Grinstead burns unit.

But there were no beds so Kevin was instead transported to the Chelsea and Westminster Hospital in London, the next nearest burns specialists available.

He said: “The ambulance staff and all the nurses and medical staff were fantastic and so professional. I can’t praise them highly enough and wish I could thank them all personally.”

Kevin was in hospital for a week and luckily the burns had begun to heal, meaning a skin graft was not needed.

But he still faces several months of recovery at home.

He said: “My left leg is uncovered now and I just have to keep it moisturised but I still can’t walk properly because of the right leg, which we have to go to east Grinstead to get redressed twice a week.”

The injuries also mean more time not working and it is possible Kevin’s lorry, worth £40,000, will be declared a write-off.

He said: “That’s what a £1 aerosol can has actually cost me. But I was lucky, it could have been so much worse. I just want people to be aware – don’t use gas burners in confined places and be aware that aerosol cans are pressurised and highly flammable. That small can was enough to cause devastation.”

Kevin added: “I just want to get the message out there. You think it will not happen to you but it can and it takes just seconds.”