Plans for the digital and education campus with studios, gallery, ‘Fablab’ café and workshops to be created at the former M&S building in Margate have been lodged with Thanet council by the EKC Group.

The Margate Digital project by the EKC Group, in partnership with the council and The Margate School, aims to  create 2,000 sq m of cutting-edge, industry-relevant training space which will focus on digital technology.

It comes following a successful £6.3 million bid to the governments Levelling Up Fund which was confirmed last year.

Ramsgate and Margate were among towns named as successfully apply for the funding with £6,306,078 granted for the Margate Digital project and £19,840,000 for Ramsgate Future.

The £6.3m bid includes match-funding which will bring the 53-57 High street building back into use as the specialist industry-focused centre on the high street. 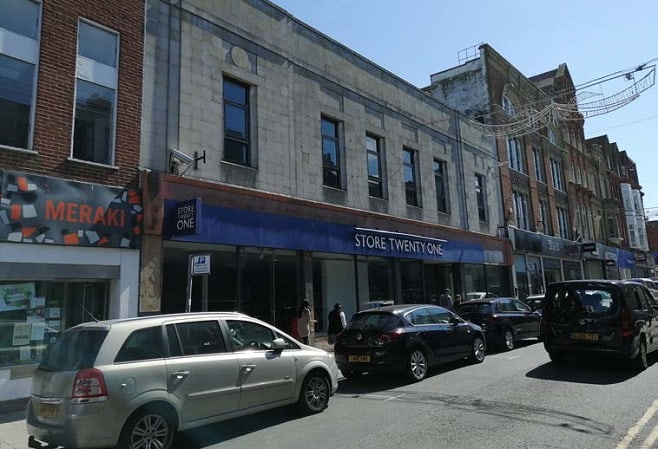 The Margate M&S has been shut for some 14 years. The building freehold was bought in 2006 by Thanet council for £4.5 million with grant funding. It has since been used by Turner Contemporary and then Store 21 until its closure in 2017.

A £750,000 project led by Thanet council has previously been spent on removing asbestos and renovations to the roof of the building in preparation for the Margate Digital works.

The new campus will also include co-working / studio space, a digital production lab, a photo studio and design booths and a 100sqm space for print and creative technologies workshops as an extension of The Margate School’s FabLab.

It will cater for some 300 students.

Planning documents from EKC, which runs college campuses including at Broadstairs, says: “It is the intention of the campus to deliver a range of industry-recognised higher-level qualifications to support the advancement of local talent in their careers, as well as to forge relationships with local and regional businesses through shared initiatives and training opportunities, creating a base of well-trained, qualified, industry-ready graduates.

“Margate Digital will breathe new life into a vacant building which has, since 2006, held various planning uses including retail and non-retail operations.

“Linked to the provision of this education-led development in the centre of the town, EKC Group seeks to deliver related transformational benefits for Margate including: encouraging inward investment from companies eager to access skills; raising aspirations for young people in the area;  supporting education acting as the golden thread in weaving together industry and learning;  providing adult retraining opportunities ensuring upskilling and reskilling; and  supporting SME through providing support in digital marketing.”

The Margate School, an independent arts school based in the  former Woolworth building, will lease circa 500 sq m of space and will offer a new design-based postgraduate and professional development provision, with expanded Fabrication Laboratory (FabLab), VR and related knowledge exchange facilities.

The planning documents say: “The combined offer of EKC Group and The Margate School presents a unique opportunity for the district in expanding its education offer within a specialist sector with related benefits.”

Opening hours would be 8am-6pm for core teaching but controlled access for staff and students will be available between 6am and 11pm.

The scheme sits alongside other projects earmarked for Margate as part of the £22.2 million Margate Town Deal which include a skatepark, the Oval Bandstand refurbishment, renovation of the Theatre Royal and a feasibility study at Margate Winter Gardens.

Money will also be spent on highways and public realm and a detailed £1.1million scheme at Walpole Bay which will include refurbishment of the tidal pool, improvements to the steps, refurbishment of the Grade ll listed lift and rotunda and proposals for a new health and wellbeing facility.

A controversial award of £4million to Dreamland will go towards the renovation and reopening the Dreamland Cinema building which has been empty for over a decade. The site will be turned into an entertainment and conference centre with space allocated to community use – understood to be the People Dem Collective group – and charities.