The portaloos will be open from (UPDATE) May 11 until September and will be based near to the Clocktower toilets in Marine Drive which were shut in 2019 due to ‘structural problems’ and have remained closed ever since. 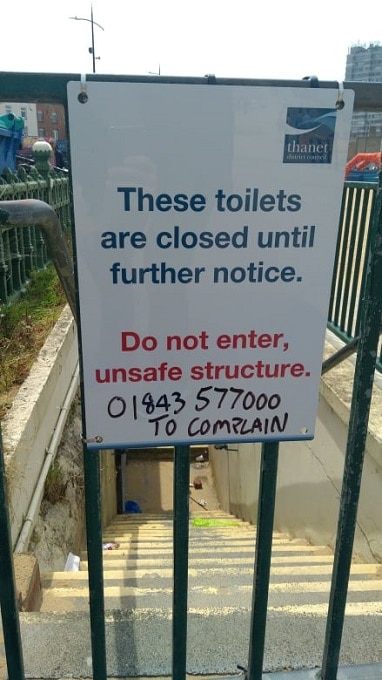 Portable toilets were in place on Margate seafront and at Botany Bay ahead of the early May Bank Holiday weekend – but only for the week from April 28 to May 4.

Last year the portable toilets were put in place at the end of March but that was not repeated this year with Thanet council saying there were enough public toilets for “sufficient provision” over the Easter break.

Margate Central ward councillors Rob Yates and Helen Whitehead have been calling for the toilets to be installed as soon as possible due to complaints from seafront traders that customers are being caught short.

The original date given to councillors for the portaloos to be reinstalled (May 28) had coincided with the end of the Empire of Light filming in the town but this has now been brought forward to May 11.

A Thanet council spokesperson said: ““In anticipation of the good weather, portaloos are being installed at Margate Main Sands and Botany Bay on Wednesday 11 May. This activity is part of the council’s Beach Management Plan to help ensure residents and visitors enjoy our beaches.”

Labour ward councillor Rob Yates said: “After numerous business complaints and lobbying, the Conservative-run TDC has U-turned, and Margate will get Portaloos at main sands again – from 28th May until September.

“ I have asked that one of the portaloos be disabled friendly again.

“However, this is a step forward from the Council’s previous statement that the toilet provision along Margate’s seafront was “sufficient”. The next step is to find a permanent toilet solution as the demand is not going away any time soon.”

A post by Cliftonville West ward councillors says: “Portaloos will be back on Margate main sands from (28th May – now May 11) for the season. Whereas not an ideal solution, it is good news for local businesses and visitors, while we await the outcome of the review of facilities by Thanet Council.”

Thanet council is currently conducting a review of the isle’s public toilets – again.

In 2019 a review into the future of the isle’s public toilets was announced by TDC as part of a bid to save £175,000 in its 2019-20 budget. A community loo deal with local businesses was one idea suggested although no further action was made public.

Thanet council’s corporate statement for 2019-2023 stated it planned to: “Undertake a full and thorough review of our public toilet facilities including providing incentives for businesses to make good quality facilities available to the public.”

A review was then agreed in November 2020 when it was reported by TDC that a total of 28 public toilets were open to the public over the summer season with 13 on or near to Thanet beaches. The review and recommendations were due to be reported back to Cabinet members  in March 2021 although this did not take place.

The council’s 2020/21 budget  made a proposal to invest in a public toilet refurbishment programme, reversing the plan to make £175,000 in savings, although this has not taken place.

Most recently public toilets in Cavendish Street, Ramsgate, were shut due to antisocial behaviour and drug use at the site.

Councils are not required by law to provide  loos and continuing cuts to local authority funding have resulted in public toilets plunging by more than 600 across the country since 2010.

At a meeting hosted by Southern Water last month it was revealed the firm is in talks with Thanet council about improvements to public toilets with water efficient facilities.

Further details of the latest public toilet review are yet to be released.