A huge thank you to everyone who came along and helped make our Spring Open Day such a tremendous success. It was really wonderful to see so many people enjoying the garden once again after the challenges of the last two years.

In total you raised over £2,200 and we couldn’t be more grateful. It will all go towards our Memorial Fund in commemoration of our dearly loved and much missed founding team member Tim Mountford, who tragically died from Covid in April 2020. In honour of him, we’re raising £25,000 to employ a horticulturalist trainee, and you’ve helped us get to nearly 10% already. We look forward to welcoming you back again next time, and we’ll be announcing the details of our upcoming Summer Music Day in due course.

Now that May has arrived, the garden has noticeably begun to fill out again and it’s an opportune time to appreciate the trees as they come into leaf. A distinctive one we have here next to our cabin, that particularly catches the eye in spring, is the whitebeam, or Sorbus aria ‘Lutescens’. For a short period each year, its new leaf buds almost look like spectacular silver goblets, not too dissimilar to magnolia blooms at first glance, as they gradually open out.

Later in the season it has creamy-white flowers followed by orange-red berries which fall to cover the ground beneath in autumn. Another very attractive spring-time specimen we’re fortunate to have is the dawn redwood, or Metasequoia glyptostroboides, which is a deciduous conifer. It has soft, feathery foliage that is lush green throughout the spring and summer, before turning yellow and bronze in the autumn.

As the month progresses and the bulbs fade, it’s time for the herbaceous perennials to get growing and take their place. Aquilegias, hardy geraniums and irises are among those that start flowering in our beds and beside the more structural echiums they start to give the garden an early summer feel.

It’s also time to plant out annuals that we’ve grown from seed once the risk of frosts has passed. White ammi, pink asters and cosmos, orange tithonia and bright golden sunflowers will form drifts in the spaces between more permanent plants. Whilst sweet peas are planted at the ends of some of the vegetable beds to scramble over freshly made hazel wigwams. The dahlias will also be planted out later in the month, and we’ll look forward to them providing blooms for cutting throughout the summer.

Elsewhere, in the vegetable beds it’s time to ‘earth up’ potato plants as they grow, to ensure the developing potatoes aren’t exposed to light, which turns them green and makes them poisonous. 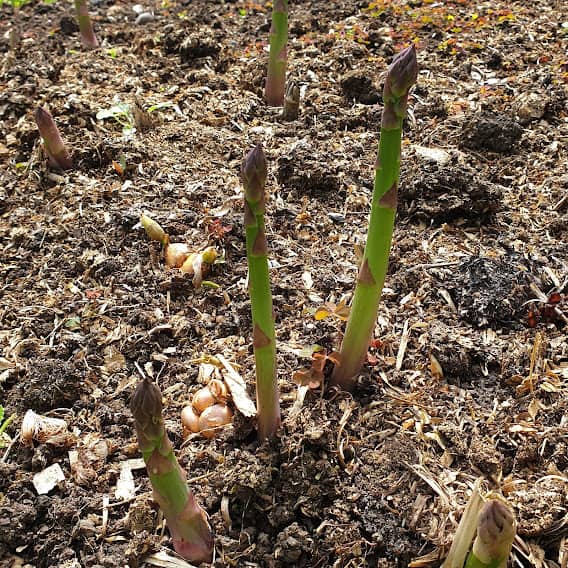 May is also asparagus season, and it’s important to make the most of its delicious flavour while it’s available for such a short time. It’s really easy to cook by steaming it lightly, and it can be served with a Hollandaise sauce or a poached egg or just plain butter. We have a very well established bed here at the garden, which we top dress with seaweed in the off season to provide it with nutrients and minerals. Each year, up it sprouts like clockwork and we are richly rewarded!