Megan is familiar to Thanet’s culture vultures as host of Things with Words, a spoken word event that has popped up at festivals, pubs and unusual locations around Kent, and as a regular act with Ramsgate’s Screaming Alley cabaret.

The show was largely made while live performance was off the table because of covid, supported through a residency at Tom Thumb Theatre, at a time when owners Sara and Alex Ratcliffe found themselves with an empty venue.

Other artists like Margate-based theatre maker Jess Edwards and Mr Teds – another Screaming Alley regular -were also able to develop new shows at the time thanks to Alex and Sara’s support. Tom Thumb might be the smallest theatre in the country, but it has become a hub of new performance and music being made in Margate.

Alpha Femme was due to premiere at The Vault Festival – Waterloo’s huge annual festival of independent theatre, however organisers made the tough decision in December last year to cancel this year’s event due to uncertainties around covid.

Still, Tom Thumb is the perfect place for Megan’s debut solo show, with a distinctly made-in-Thanet tag. Costumes are made from ethically sourced and upcycled material by Lou Halswell of clothing brand Fuud, including a blazer made entirely of plastic bags, a regal skirt of faux fur fragments and a body suit made from eco lycra.  Music production has been assisted by Nicholas DeCarlo of Mash Studios in Ramsgate, and Megan has been rehearsing in the Ramsgate Boating Pool as it awaits development.

The show is about feminism. 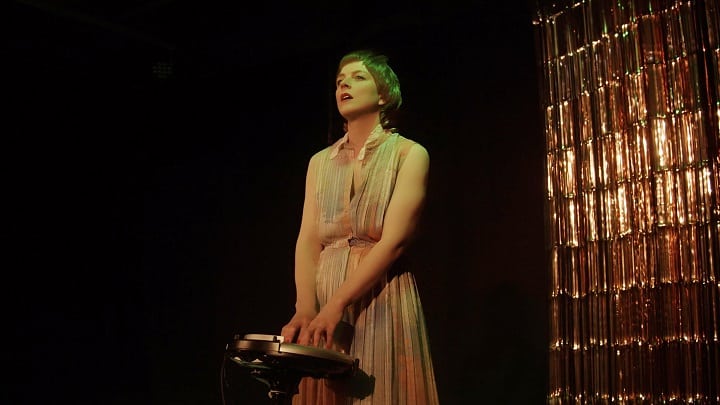 Megan said: “It seems general, but when you’re making a performance, you’re always tapping into your personal experience, so it’s about a personal relationship with the idea of empowerment and embracing complexity.

“I was brought up to be a feminist by being a strong woman and actually, there’s more to feminism. There is celebrating specific ways women experience the world, and also looking at how power works on multiple levels.

“I have women ancestors that were suffragettes and trailblazers (Millicent Garrett-Fawcett and Elizabeth Garrett-Anderson) who I am proud of, but these days we can say that feminism has had a race and class problem. Garrett-Fawcett was fighting for some women to win the vote, but as a public figure she also spent time in Africa doing the Empire’s bidding during the Boer War.

“I wanted to capture some of these uncomfortable realities, so the characters are by no means perfect feminist icons. I also want it to be super fun. As Toni Cade Bambara said, the role of the artist is to make revolution irresistible. So, I’ve tried to do that with comedy, songs I wrote, a bit of twerking, juggling, animal studies – basically there’s nothing this alpha won’t attempt.”