By Will Jennings, Sportsbeat

Thanet ace Taylor is a serving Royal Marine and only started bobsleigh in 2019 when he was drafted into Brad Hall’s injury-hit crew.

Two years later his place at the Olympics is already secure, forming part of Britain’s four-man team alongside pilot Hall and fellow brakemen Nick Gleeson and Greg Cackett in the Chinese capital.

The quartet have enjoyed a searing season on the World Cup circuit and Lawrence reckons their close-knit camaraderie has been pivotal to their rise. 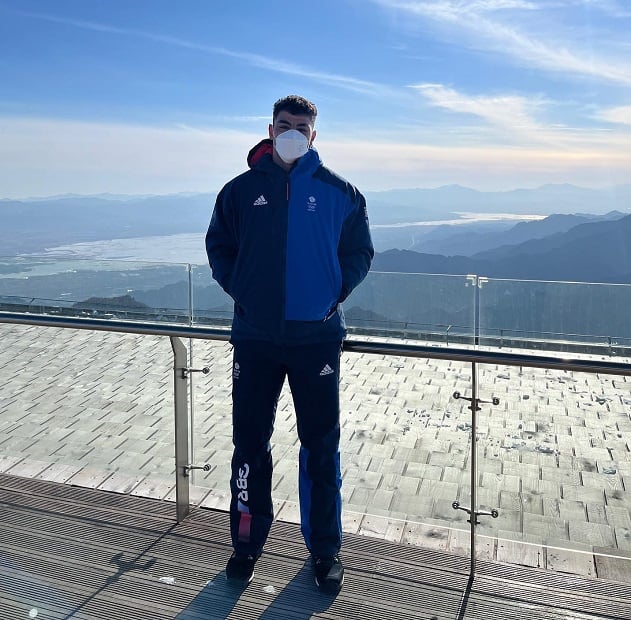 The 25-year-old said: “The team dynamic is so good. We get on so well and that’s what makes us such a good crew and has led to the success we’ve had.

“It always helps when you get on – you spend half the season away literally in each other’s pockets all the time so if you don’t have that sort of bond, and banter between the lads, it can be a very long and laborious season.

“I definitely am able to hold my own – obviously being from a military background, myself and Nick have loads of banter between us for being part of the forces.

“And then we poke fun at Greg and Brad for being – in quotations – ‘civvies.’

“My military background absolutely helps with the discipline and organisational side of things – there are so many things that go on in the background with bobsleigh in terms of travelling around Europe, timings, race days and places to be at certain times.

“There are always different things to overcome – so it definitely helps in that sense. Being around the lads as well – you know how to interact and give each other space if you need it, or gee people up if they need it.

“I loved my time in the military – getting to know all the lads and with all the banter. It makes the job so much more enjoyable being with like-minded people, and there’s definitely a good crossover between the two.”

Taylor has been a key cog in Britain’s World Cup four-man machine as they racked up a brilliant hat-trick of silver medals.

They finished second in Winterberg – twice – and Igls fired Hall’s crew up to fourth in the world rankings and fifth in the combined competition.

The Winter Olympics are already in full swing but Taylor, also a keen rugby player in the military, will have to wait until February 19 until he takes to Olympic ice.

The pacey conditions at the Yanqing track will pose a challenge but Lawrence hopes the team’s versatility can help them clamber onto the podium.

He said: “The track is going to be challenging because of the minimal trips around it, so it’s going to be about who can adapt to it and be consistent.

“Brad is a very good pilot at adapting to different tracks, so I have no doubts he can adapt and do the business.

“We know Brad can drive well and we can push well, so it’s about maximising those and carrying them through to the race day.”