A Broadstairs mum-of-four who made it her mission to lose weight after being diagnosed with Type 2 diabetes has shed an amazing 13.5 stone.

Care worker Anne-Marie Tate was using crutches due to an ankle injury and her weight when other health problems prompted a visit to the GP.

The 43-year-old said: “I was informed I had type 2 diabetes and I literally went from the surgery and walked around the corner to the Slimming World club at St Peter’s.

“I had osteoarthritis in both knees and because I was so heavy I was having difficulty walking.”

At that point in March 2019 Anne-Marie weighed just over 26 stone and it was impacting her health and making everyday tasks, such as getting in and out of the bath, difficult.

After joining the group Anne-Marie changed her diet, swapping high calorie foods that tend to be laden with oils, fats and sugars for meals that are full of filling foods with proteins such as meats, potatoes and pasta. The aim was to feel full for longer, making it less likely that she would want to snack.

She said: “The group has been amazing, we are like a little family encouraging each other and doing it together.”

By August last year Anne-Marie weighed 13.5 stone and says she reached the target b taking it one small step at a time.

She said: “Everything I eat now is nice and healthy, lots of veg and fruit. You have to change everything and you have to stick to it. On this diet you can have unlimited pasta, rice and potatoes and as you get smaller you reduce portion size which means you don’t feel hungry and start craving.” 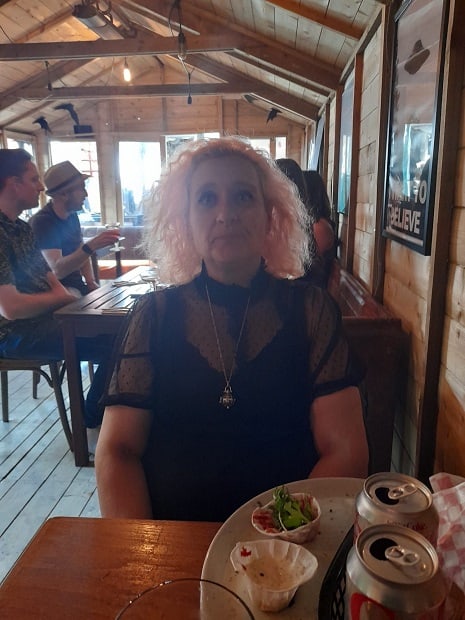 Losing half her body weight has resulted in some huge changes to Anne-Marie’s life. She said: “I am a care worker and have recently gone back to work. I was off for five years after slipping and breaking my ankle and then having the osteoarthritis and putting on more weight and being diagnosed with the diabetes.

“But I went back to work in November and I have reversed the diabetes so I still take tests but am no longer on medication.

“I walk everywhere and I don’t need the crutches anymore. I used to struggle to get  in the bath but now I can just jump in and out.

“Your health is the most important thing. At the start I had only just turned 40 and just thought ‘I can’t have diabetes at 40.’”

The benefits have also been felt by Anne-Marie’s grown-up children aged 24, 19 and twins of 18.

She said: “My daughter was 21 and 19 stone,. She has now lost 9 stone. She doesn’t go to the club but watched me and wanted to do it for herself.

“My elder son is also very tall and broad and he has lost four or five stone without even trying because he eats what I give hm and so now has a healthier diet so it has had an effect on everybody.”

Anne-Marie says she joined the Slimming World social team, helping other members, as a way of making sure she attended even if she was wavering.

She said: “It meant I had to go as I was helping so I had to do it and stick to it!”

She is now hoping to learn to drive so that she can then go on and train as a consultant. She said: “I’d like to do that in the long run as Slimming World is a part of my life now and will always be a part of my life.”

Find out more about Slimming World at https://www.slimmingworld.co.uk/