An unusual visitor has been spotted in Ramsgate harbour today (January 9).

Resident Jon Gosman took this snap of what is believed to be an Ocean Sunfish, the second largest bony fish on the planet.

It usually only visits UK waters in the Summer, generally between June and September, when it comes to feast on jellyfish while the water is warm.

Sunfish can grow up to 332sm and weigh up to 1,320kg. The species is listed as vulnerable on the IUCN Red List, but on a regional scale they are data deficient, meaning there is not enough information about the population to judge their conservation status. 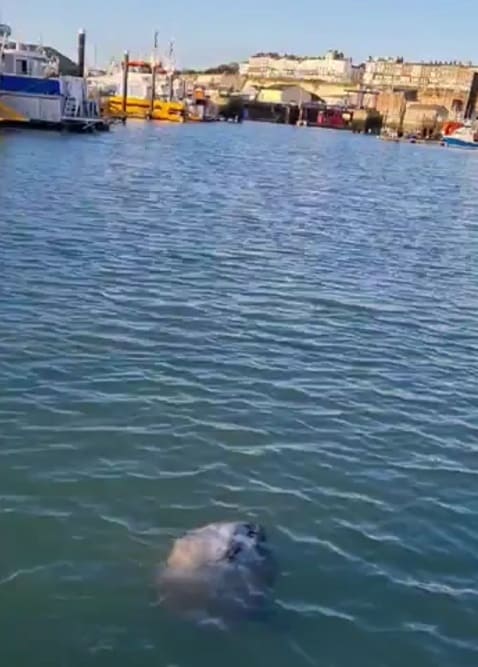 It is suggested that the basking behaviour is to help the sunfish raise its body temperature after diving down to cooler waters to feed. The fin at the surface can easily be mistaken for a shark, but once up close they are unmistakeable.

Sunfish feed on jellyfish and salps as well as a wide range of other animals. Smaller sunfish have the most varied diet – when they’re under one metre in length, around half of their diet is jellyfish and the other half is a mix of species that live on the seafloor, like crustaceans, molluscs, and some fish.

Ocean sunfish are found across tropical and temperate waters; they have been noted across the length of the Atlantic from Iceland to Chile.

An increasingly common visitor to southern and western parts of the UK in summer months.

In most other languages, they are called moonfish.

The Wildlife Trust asks people to report any sunfish sightings to the local Wildlife Trust. If you spot a sunfish at sea, maintain a distance of 100m and put the engine into neutral if any closer to avoid propeller injury.

Information with thanks to The Wildlife Trusts