A heavy gale of January 1978 destroyed the Margate Jetty, changing the coastline forever.

This incident still leaves a legacy of found Jetty remains that often come ashore or are uncovered by the tide during the winter months.

Forty-four years after the event old Jetty timber can still be found and recently a piece was washed up at Nayland. 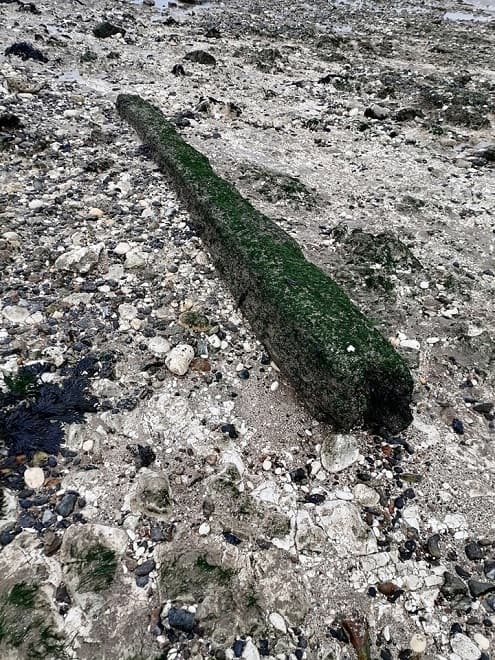 The wood used in the construction of the Jetty was greenheart, a south American hardwood from Guyana. Greenheart was used for its resilience in the marine environment and resistance to wood boring worms. It was often referred to as an iron wood given its incredible strength.

The collapse of the jetty saw many of the greenheart timbers come ashore into the inter tidal zone. Many were removed at the time, others were buried where they remain today. The dimensions of the timber 300mm in width 4500mm long suggest that at the time of construction the wood used would have been a minimum of 100 years old, giving an estimate that the tree was living in the late 1700s.

Measuring the greenheart that come ashore does confirm this. Green heart takes about 100 years to grow 300mm wide The recent discovery of a beam from the jetty extension is a remarkable find. The wood is over 220 years old. It has been buried in the marine environment for the past 44 years.

Examination will find the wood incredibly strong. If the wood was removed and dried out the centre could still be reused. That is one of the qualities of greenheart.

Over the last year Margate has seen lots of sand movement on the low water mark and some areas have been stripped back to the clay.

A look at the Margate Jetty – by Thanet Hidden History

In Thanet Margate Jetty, also known as Margate Pier, was one of the casualties. The pier, designed by Eugenius Birch in 1856, had suffered damage from the sea over the years.

On 1 January 1877 it was sliced through by a storm-driven wreck that marooned 40 to 50 people. They were not rescued until the next day.

The jetty closed in 1976 on safety grounds but the structure survived until 11–12 January 1978, when it was hit by another storm.  This surge destroyed much of the pier with planks washing up on to Margate beach. It also isolated the lifeboat station.

Following the storm the RAF air sea rescue Wessex helicopter from Manston, landed some of the lifeboat crew onto the station and after checking for damage to the lifeboat slipway, the boat was launched and taken to Ramsgate.

The wood from the pier was burnt over several days to try and clear the beach, with many residents gathering up what they could and taking it home. The wreck of the pier remained for several years, surviving numerous, failed attempts to blow it up,

The final pieces of the pier head structure were finally dismantled in 1998. Margate Jetty is now categorised as a lost pier.

The Cliftonville Lido also suffered damage and granite blocks were battered from Ramsgate harbour’s East Pier wall and lost in the sea.