The neon Dreamland sign on the fin of the Grade II* listed cinema is among those that will be removed temporarily and replace with Empire Cinema signs during filming on the new Sam Mendes movie next year.

An application has been submitted to Thanet council for permission to temporarily install the alternative signs, subject to approval from Historic England.

A 20,000 sq ft sound stage enclosure has been installed at Dreamland for filming of the latest project by director Sam Mendes – love story Lumiere ( Empire of Light).

The film will be set in and around a beautiful old cinema – Dreamland’s Grade II* listed venue-  on the South Coast of England in the 1980s. It will star award-winning The Crown actress Olivia Colman and Micheal Ward, of Top Boy fame.

As part of the set the cinema will be rebranded until the Dreamland signage is reinstalled at the end of May.

The application asks for permission for: “Existing “DREAMLAND” neon illuminated signage to be removed from brick facade and fascia panel and stored ready for reinstatement post filming. This will be wrapped, protected, and stored on site in a secure room.

“Proposed lettering to be temporarily replaced with similar neon signage reading “EMPIRE”. Every effort will be made to use existing fixing points when securing to the brick fin, but any new holes required are to be made in mortar joints and repaired accordingly with lime mortar following reinstatement of original signage.

“The lettering reading “AMUSEMENT” AND “PARK” will also be carefully removed and stored, for reinstating post filming.

“A similar new additional sign is proposed above the first-floor glazing, also reading “EMPIRE”, which will be designed to replicate the lettering on the main brick fin.

“The western end of the Marine Terrace elevation comprises of two large non-original fixed glazed shopfront panels, which are currently used for advertisement purposes. The existing fixed glazing is proposed to be removed and stored carefully for reinstatement after filming.

“New prop doors are proposed to be fixed into substrate in same location as existing glazing frames. 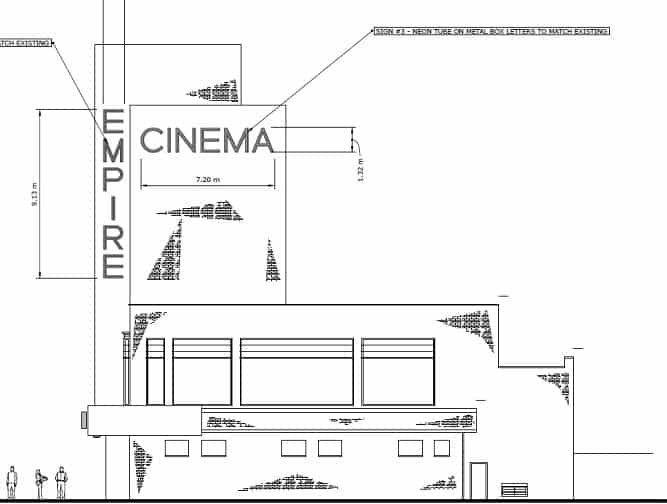 “The team who will be installing the temporary works are highly experienced in working with buildings of historic interest, and have successfully installed and removed similar temporary schedules of works on a variety of heritage assets, including a number of stately homes.”

Mr Mendes is known for works including  James Bond films Skyfall and Spectre and the war film 1917 as well as numerous West End stage shows. He has written Empire of Light, making it his first original solo screenplay. He will also direct and produce with Pippa Harris of Neal Street. Cinematographer Roger Deakins, who won an Oscar for best cinematography at the Academy Awards for his work on 1917, is also involved.

Two 10 Casting is looking for men and women to feature as extras in the movie.

Filming will take place between February and May. If selected by the Director, people will only be needed for a few days in this period so working as an ‘extra’ would be easy to fit in alongside other commitments.

Production are particularly interested to hear from anyone with fabulous 80s hair, grown out hair, skin heads / shaved heads (men and women), women with short hair, people with retro looks, mullets and fringes. All roles are paid. No previous experience necessary.

To be considered for a role you must first make a profile at www.two10casting.com/kent

The planning application was submitted on December 20. A decision is yet to be made.