Prime Minister Boris Johnson is in Ramsgate today (December 16) visiting the Saga centre as part of the government drive to encourage people to get their covid booster jab.

The PM arrived at Ramsgate railway station this morning before heading to the centre which is leading vaccination clinics in Thanet.

It follows public briefings this week announcing an ‘emergency’ booster programme to make sure every adult aged 18 and over is offered the jab by the end of this month.

‘Doc’ Atherton, who is part of the team working at Saga, said: “Saga is one of the busiest if not the busiest vaccination centre in the country and Boris came to meet the team who have provided “an amazing job” in the vaccination roll out.

“I myself, apart from being a director and presenter at Academy FM, also work these days for the Primary Care Network and have now been seconded here 6 days a week.

“It’s a great team and whatever your politics, it’s not every day a Prime Minister comes personally to thank you for the part you are playing. None of us knew the Prime Minister was coming so it was a real surprise. The whole team here is great and we are all proud to be part of such a successful vaccination centre.

“I’m part of the NHS (CARE) Primary Care Network Pharmacy & Medicines Team and am usually based in GP surgeries. However, given the accelerated programme, I’ve been switched to doing this every day now.

“We chatted about his new daughter and that his wife works for the Aspinall Foundation which of course is not far away.”

Dr Ash Peshen, who leads the vaccination hub at Saga, said: “The Prime Minister was here for about one hour and 20 minutes. He met everyone and chatted and was very kind, thanking all of us, me personally and my staff.

“It was good. We have created a wonderful site and will keep going.” 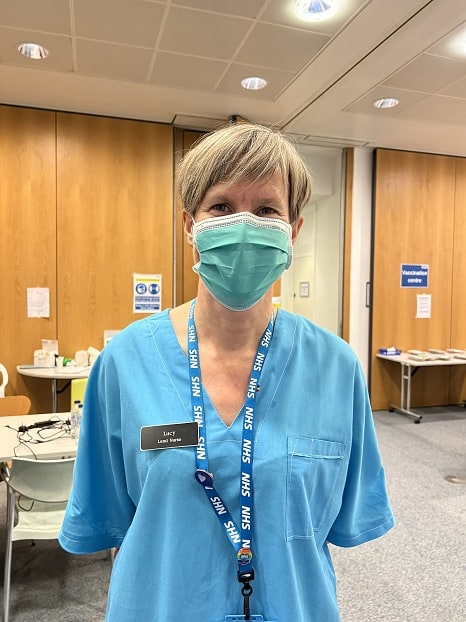 Yesterday (December 15) the team at Saga reached 200,000 vaccinations given and 60,000 boosters. Nurse Lucy Le Vasseur (pictured above) has single-handedly given 15,000 vaccinations. The team had been delivering around 2,500 jabs per day but the figure since the booster drive is now close to double that amount.

Thank you to all the staff and volunteers behind the national effort to Get Boosted Now.

In Ramsgate today I had the privilege of meeting Lucy who has vaccinated an extraordinary 15,000 people in a year.

Lucy said: “It’s such a great team here, we all work together. I have no idea how I have managed to get to 15,000; I just keep going. Like so many people, I want us to be able to return to a normal life, so the more vaccinations we give, the sooner that may happen.’’

The PM said the Saga centre was “the best” he had seen.

In a public briefing yesterday the PM said the doubling rate of Omicron in some regions is now down to less than two days.

He added: “I’m afraid we are also seeing the inevitable increase in hospitalisations, up by 10 per cent nationally week on week and up by almost a third in London.

But we are also seeing signs of hope, because since we launched our Emergency Omicron appeal on Sunday night a great national fight back has begun and people have responded with an amazing spirit of duty and obligation to others.”

He added: “I want to thank our NHS, our GPs our pharmacists, who with barely a day’s notice – 48 hours’ notice, have so accelerated the programme that we began this week with the biggest Vaccination Monday ever in England.”

The GP team at Saga have extended vaccination clinic hours.

Anyone aged 18 and above who had their second jab three months ago or more is eligible for the booster.

People can walk in or can book online via NBS or by calling 119.

The new hours are:

National guidance is for the second dose to be a minimum of eight weeks from the first dose. Please do not go to a walk-in clinic for a second dose earlier than 8 weeks.

If you need to have the AstraZeneca vaccine for for medical reasons, or you are still waiting for your second dose, please email kmccg.covidvaccine@nhs.net for information on your nearest clinic.