Campaigners and local businesses say rubble and rubbish are strewn across a Margate Old Town site which once was home to a mature Sycamore tree, birds and pollinators.

The Duke Street plot was the focus of a campaign at the beginning of this year to save the tree from felling as the site owner readied to develop the plot.

The tree stood on the site of a proposed development for a four-storey property with five flats and a commercial unit which was given planning approval in 2018. 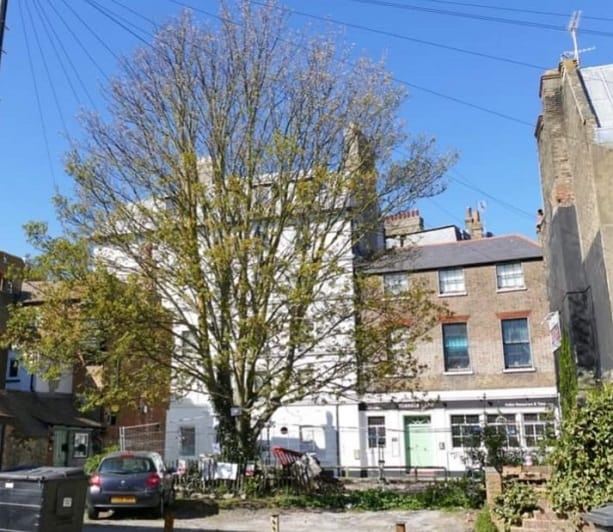 But since the tree was brought down in May there has been no progress on site which now is waterlogged and has nothing more than the rubbish and a portable toilet in place.

Save the Duke campaigners, who occupied the site for several days in a bid to save the tree, say many promises were made by Thanet District Council and the owner of the now barren site that new saplings would be planted and jobs and housing for local people would be provided.

But, as yet, residents and businesses close to the site just have a view of the mess and the portable toilet.

Tree campaigner Dosh Archer said: ‘Instead of a tree and a garden what Margate now has is a visual and visceral reminder of the inner chaos of people who give no regard to our delicate and essential relationship with nature. Who gave no regard to the fact that the tree was housing pollinators, birds, insects, fungi, that it was producing oxygen for us to breath, sheltering us in summer, spinning its little helicopter seeds in the autumn, and even in winter standing proud above all the buildings – the tallest living tree in the Old Town’.

“A pile of rubbish and rubble is now strewn across what used to be grass and flowers, birds and shrubbery. Instead of a tree standing proud there is rubble and on the waterlogged site stands a portable toilet which is a disgusting and vile vision, next to eateries, restaurants and businesses who are trying so desperately to survive in these covid stricken times.”

Campaigners say one restaurant owner has told them of the decline in his business which he believes is result of the disgusting view of the Duke Street plot. 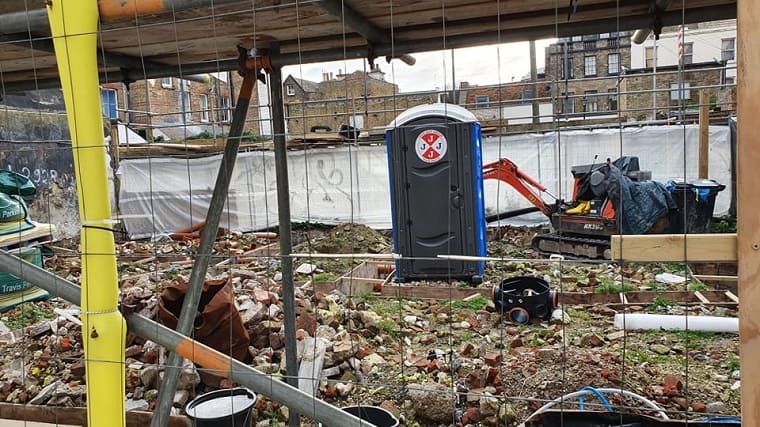 Dosh added: “It has been suggested that it is not all the fault of the developer, that the site has become waterlogged, making it hard to continue with the work. But in a time when the ice caps are melting, cutting down the very things that are soaking up the water should not be allowed. A council which chose to put money and madness before community, nature, and the people and businesses of Margate has left Margate with a very big and ugly problem.”

Campaigners say they want an explanation from Thanet District Council and a plan to show how the site will be cleaned up in time for Easter when the town will be receiving vital visitors who contribute to the local economy. They also say the eyesore is unhygienic and bad for residents and businesses.

Dosh added: “We also want immediate protection for the last remaining trees and green areas in Old Town Margate, to ensure that this kind of environmental disaster does not happen again.”

The site was sold at auction as part of Thanet council’s asset disposal programme in February 2017. In 2018 permission was granted for the flats development. An application for a four-storey build on the site was previously approved in 2007 when the site formed part of a larger redevelopment scheme known as the Queen’s Arms Yard but that permission expired.

Several protests were staged by groups Thanet Trees, Mature Trees Mature and Save The Duke. A sit in was staged from late April but on the early May bank holiday the site owners turned up and a confrontation took place leading to police arresting the owners and two protesters. All were later released without charge.

Campaigners were evicted from the site on May 6 and the tree felling followed.

A spokesperson for Thanet District Council said:“As yet, the council has not received any public complaints regarding the site on Duke Street. We will now look into the site and, if appropriate, make contact with the contractors.”

UPDATE DECEMBER 21: A Thanet council spokesperson said: “Council officers have visited the site on Duke Street. As it is a construction site, we anticipate that any impact on the appearance of the surrounding area will be temporary. These circumstances are not sufficient for the council to take action under planning enforcement at this time. We will, however, keep the site under review.”