This was a Kent Shield fixture, caused by a re-vamping of the Kent knockout competitions, where clubs are now represented by their second XVs.

Wanderers fielded a good mix of youth and experience, who were captained by Jay Sanford, and who had the advantage of the slope for the first half.

A couple of early penalties went against them, before on six minutes a good solid scrum from the home pack led to quick hands in the backs giving outside centre, Harry Carter, the chance to show his pace, before touching down. Harrison Leach added the extras for an early 7-0 lead.

Two penalties in quick succession put pressure on Wanderers but good defence cleared the danger. A line-out was stolen as Wanderers returned to twenty metres from the visitors’ line. Pressure built  and from a strong scrum, Dan Howard, playing at eight, broke clear for a nicely constructed try. Leach again converted and Thanet led 14-0 after twenty-two minutes.

Howard and Callum Doody combined well but the attack broke down and a couple of conceded penalties also spoilt promising situations. Half time neared as blind side wing forward Warren Riddell-Bloomfield was the unlucky one to draw a yellow card from referee Graeme Ludley after a team warning.

Three minutes remained before half-time when Ashford handled well along the line, sucking in the home defence, before touching down wide right for an unconverted try that made the score 14-5 at the break.

Both defences were strong during the second half and despite good breaks by the Thanet back line they couldn’t get over the opposition line. After twenty-five minutes of the half, following four penalties conceded by Ashford, in quick succession, Leach took the points on offer for Thanet to lead 17-5. 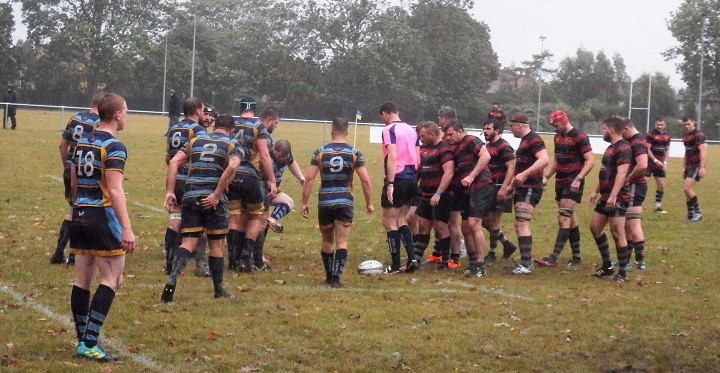 Club head coach, Mike Pond, praised the side’s composure and game management during the remaining minutes which ended with the scores unchanged.

This was an entertaining game that introduced satisfied Wanderers supporters to some of the young players who are in their first season of senior rugby.  Their reward is a round trip of 160miles to visit Southwark Lancers 2s, in inner London on or before November 20.