If one street can tell the story of Margate- and, of course, Cliftonville- it is Northdown Road. Running from the suburbs of Palm Bay down to the bustle of the harbour and Old Town, it has seen Margate rise and fall time and again.

Historically serving the visitors staying in the hotels and guesthouses strung out along the cliffs of Margate’s east side, and providing goods and services for those businesses too, today it mostly serves locals.

Northdown Road caters equally for old Margatonians, the Down From London creatives doing up old houses, and the diverse communities who have made their homes in Margate.

There are practical shops, like Margate Decorators’ Merchants and grocer KG Winters, workspaces like Northdown Studios and The Shop Front, and places for a night out like Banks Alehouse and Margate Arts Club. 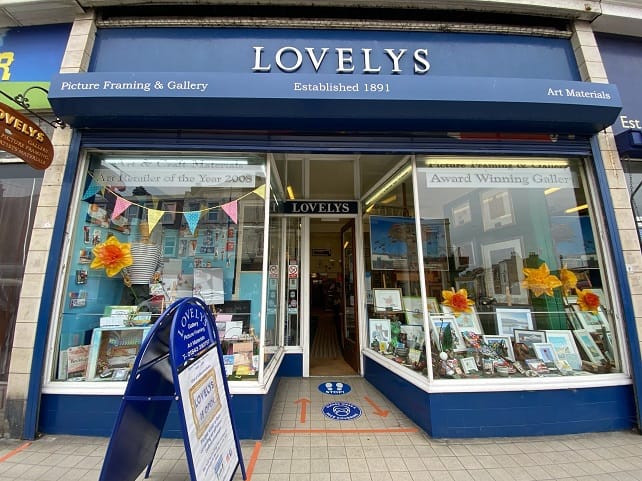 The street is home to some of the Isle of Thanet’s oldest businesses. Lovely’s supplies art materials, provides picture framing. The business has been trading since 1891, when it was one of the first to import lengths of picture frame moulding from Germany, and celebrated its 130th birthday this summer. 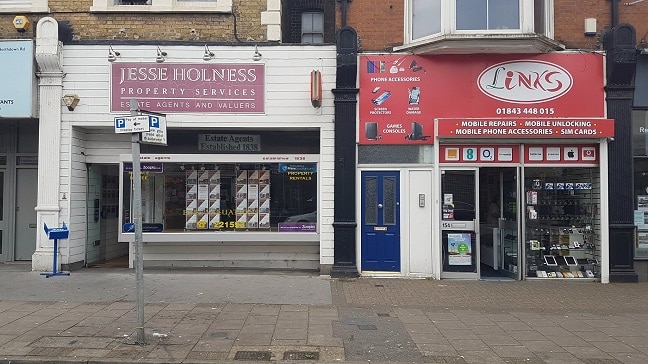 Older still are estate agents Jesse Holness, established in 1838. But older than both are undertakers Gore Brothers, who had been providing funeral services for at least 60 years when Lovely’s opened. The company is still in the hands of the Gore family. 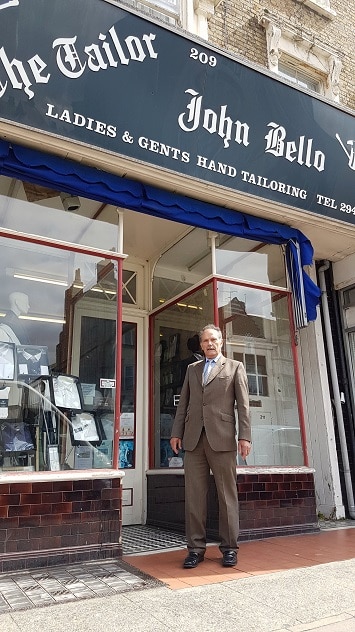 Of course, like most shopping streets, Northdown Road has seen closures in recent years. Many were familiar local names, and reflected the road’s reputation as home to the Isle’s finest shops in the 1960s and 1970s. John Bello the Tailor had once been a cutter for Norman Hartnell, the Queen’s dressmaker. Potton’s sold high-end menswear. 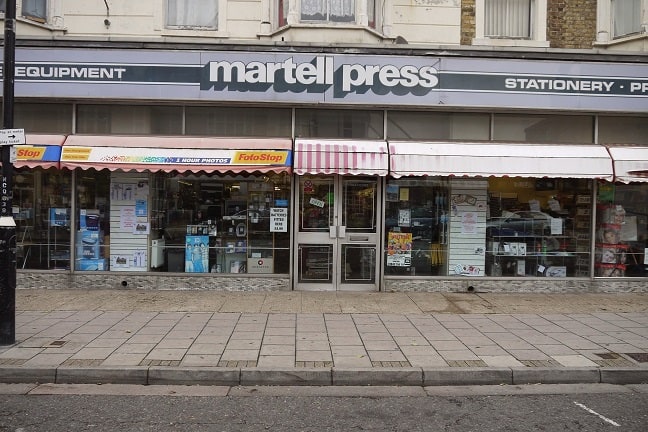 Martell Press sold fancy stationery. Thornton Bobby had started selling pianos, but from the 1960s sold colour TVs, hi-fis, and all the latest labour-saving devices for the kitchen. 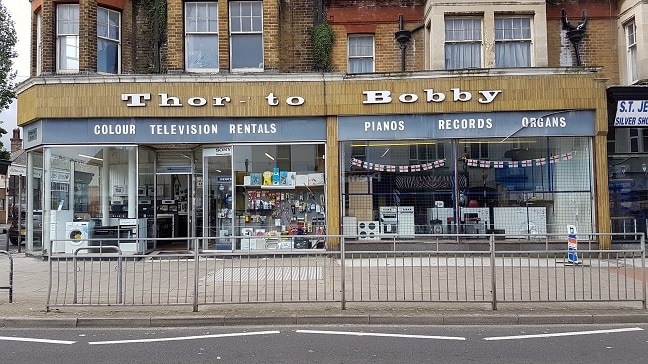 There are, of course, some survivors from that era. Batchelor’s Patisserie has been serving fancy cakes and coffee for over 50 years. It has one of the finest intact cafe interiors of its age in the UK. Another great original interior, just off Northdown Road, can be found at the Dalby Cafe. Opened just after the Second World War, it has bench seats taken from old Margate trams, original formica tables, and serves what many consider the best breakfast in town. 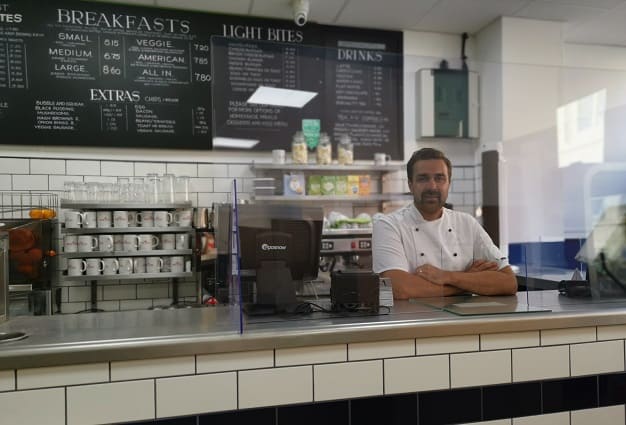 Those old traders nestle amongst a new wave of businesses, many – paradoxically – looking back to the 1960s and 1970s.

Sunny Vintage & Retro can be found in the old Potton’s shop. They sell old postcards, vintage furniture, toys, and collectables. 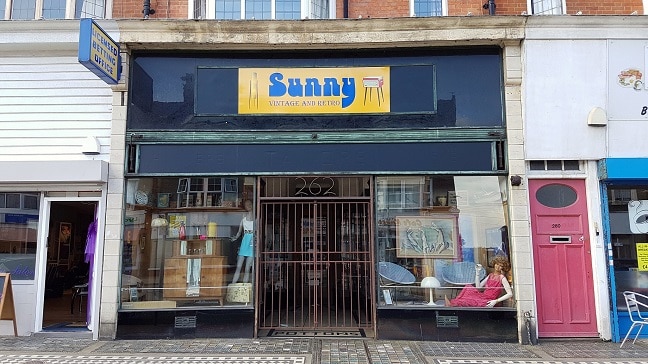 And just across the road, Lost Property occupy the old Whites of Kent store. A variety of traders sell furniture, clothing, records and other vintage goods. Other antique stores, junk shops, house clearance businesses, and charity shops are scattered along the length of Northdown Road. 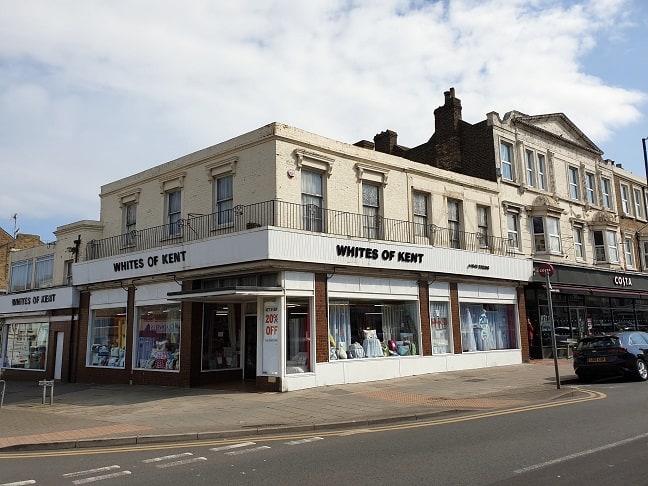 The street has two secondhand record stores, too. Cliffs combines vinyl, a cafe, a hairdresser, and a recording studio. They were attracted to the street by the availability of large property – and had been put off the Old Town by its erratic trading hours. 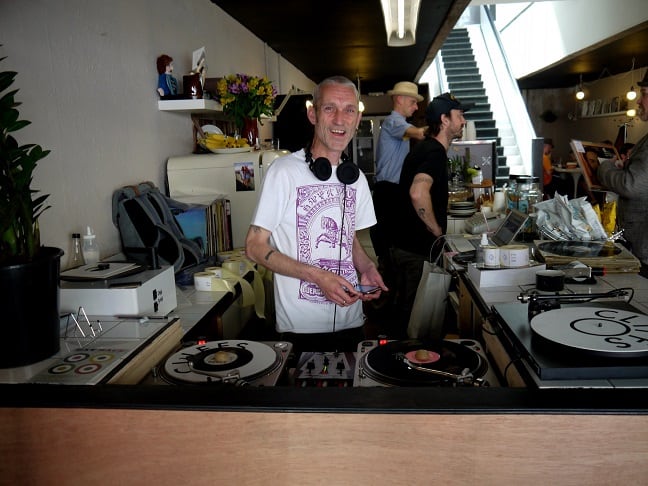 “Northdown Road’s not seasonal, it’s more ‘local centric’ (although the amount of tourists has gone through the roof now)” says co-founder Ed Warren, “and there’s much more diversity of product on offer.”

Cliffs, he says, has built a loyal following. “Our very first customer still comes in every single day. He has his own mug and stamps his own loyalty card if we forget.” 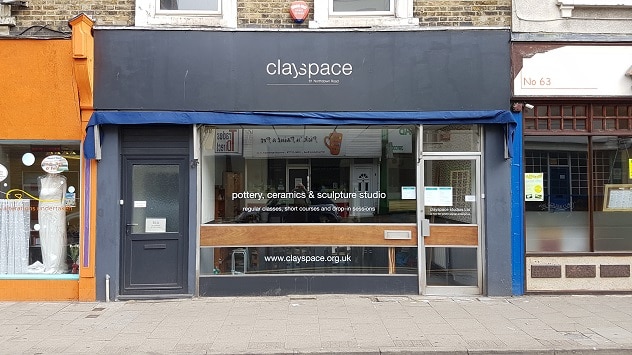 Clayspace is a pottery workshop that was the first of the new wave of businesses to open on Northdown Road, back in 2015.

“There were lots of little businesses that had been here through the thick and thin, and the feeling there was space for the new ones too.” says potter Bridget McVey, “We were the first of those new businesses to open. As new businesses opened, it was really nice to feel we were all in it together, and all helping each other out. Not competing but collaborating.” 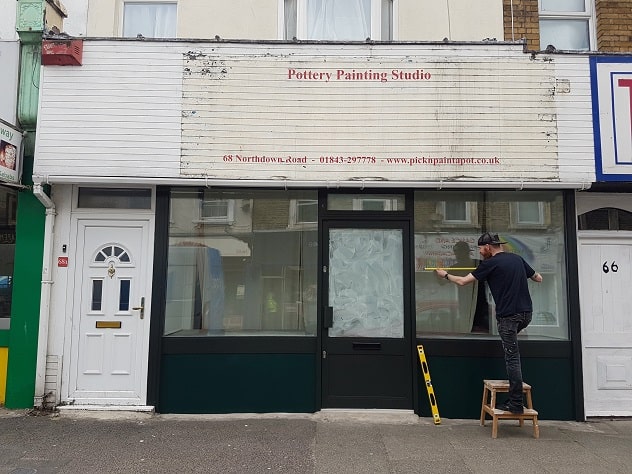 As well as Parson’s DIY skills, many of the shops have shared a signwriter, too. Andrew Hudson of Hermetic Sign Co, based on Margate High Street, have hand-painted signs for Quo Vadis, KG Winters, Cliffs, Skinny Dip coffee and others.

The newest building on Northdown Road is at Margate Caves.

The address of the Margate Caves visitor centre is No. 1 Northdown Road. Opened in 2019, the building provides an entrance to the historic caves, alongside a cafe and community rooms. Ahead of construction, an archaeological dig on the site found evidence of a bronze age settlement, with underground grain stores. 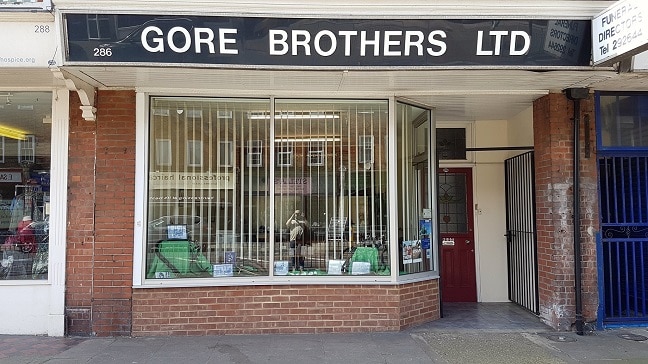 With suggestions that the Isle of Thanet’s earliest settlers were traders, perhaps this – not Gore Brothers – is the oldest shop in town.