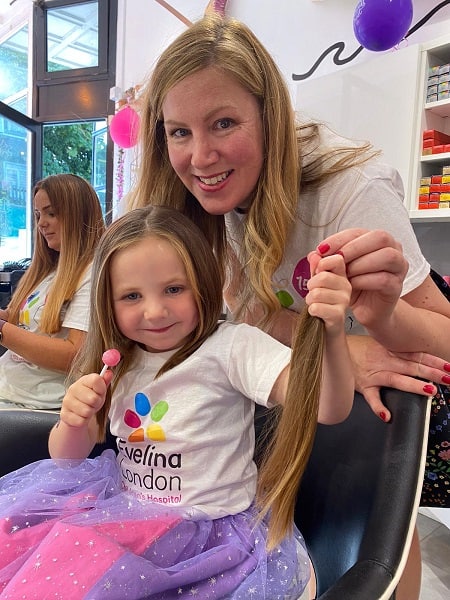 A four-year-old Margate girl has started school with a brand new look after cutting off 12 inches of hair to raise money for the hospital that saved her life.

After getting her new haircut, Evie Cox has raised more than £1,000 for Evelina London’s Children’s Hospital and is donating the hair she’s had chopped off to charity Little Princess Trust that provides real hair wigs to children and young people who have lost their own hair through cancer.

Evie has undergone two open heart surgeries and multiple procedures at Evelina London to mend a number of life-threatening heart defects, all before her second birthday, with her first surgery taking place when she was just six days old.

Evie’s hair was cut by mum Jo, who works as a hairdresser at the Little Hair House in Broadstairs.

Jo, 43, said: “Evie loves her new look. She hadn’t had her hair cut for over a year and it’d grown so long we had to keep it tied up most of the time. Now it’s much more manageable and she’s really happy with it.”

The idea came about after a colleague of Jo’s spoke about cutting her hair for charity. Jo said: “My colleague Millie has donated her hair a few times to the Little Princess Trust over the years, to be made into wigs for children and young people who have undergone cancer treatment. It sounded like such a great cause.

“We’d been planning a haircut for Evie before she started school so spoke to her about the charity and she was excited about helping other children.

“We decided we’d take the opportunity to raise some money for the hospital that has cared for us over the years.”

The care began before Evie was born, with doctors diagnosing her heart problems while she was still in the womb.

It was found that her two main blood vessels, the pulmonary artery and the aorta, were swapped over. Known as TGA (transposition of the great arteries), this means that blood flows to the lungs and picks up oxygen but is then pumped back to the lungs instead of travelling around the body. The blood that flows around the body is unable to reach the lungs to pick up oxygen and continues circulating, which means it can’t function properly.

Doctors also discovered that she had multiple other complex heart problems, including only one coronary artery instead of two.

It was arranged that Jo would give birth at St Thomas’ Hospital, which is co-located with Evelina London, in order to be assessed by expert clinicians as soon as she was born.

Jo and her partner Justin were so impressed by the care that they received leading up to Evie’s birth, that they gave her the name Evalina, in tribute to the hospital.

Following all of her operations, which included a nine hour open heart surgery when she was two, Evie is doing extremely well. Jo said: “At a recent appointment at Evelina London, we were told her heart is excellent. She will need another operation when she is teenager, but right now she’s a bright, excitable and confident little girl.

“With all the she’s been through, it means so much to see her start school. We’ll always be so incredibly grateful for everything Evelina London has given us.”

To donate to Evie’s fundraiser, please visit her JustGiving page. 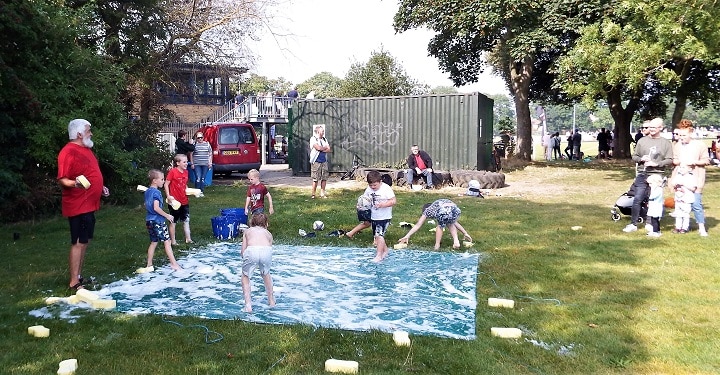 The community day marked the official return to rugby for Wanderers minis and junior and was also notable for the introduction to club members of the new major sponsor for the junior, girls and schools programme C Watkins Plumbing LTD.

The plumbing business was first established by Clifford Watkins in 1962, where he was soon joined by his son Wyn who played for Thanet Wanderers and is remembered there as a good scrum half.  Wyn took over the reins of the business in the 1970s and under his astute leadership Watkins grew to be a national force as a leading building services contractor in the South East.  Watkins Ltd are committed to engaging with their neighbours, communities, suppliers, society and the environment. The three year sponsorship agreement with Thanet Wanderers Ltd links two concerns which both share the belief in community as a force for good. 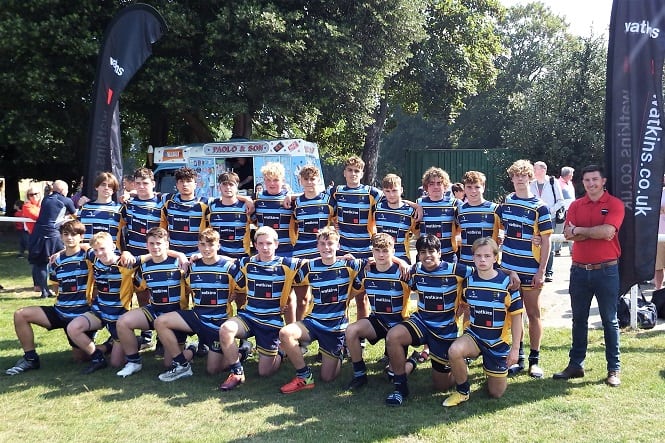 A set got a first airing when worn by the Wanderers U16s during an excellent demonstration match against the U17s side and very smart it looked too.

Younger warriors were more concerned with filling their goody bags, kindly supplied by sponsors London Array, with many items from them and Watkins whilst the stand for first team sponsor Miles and Barr, was laden with goodies among which the inflatable beach ball seemed especially popular.

Many thanks to them all for their gifts for the youngsters and their time handing them out. 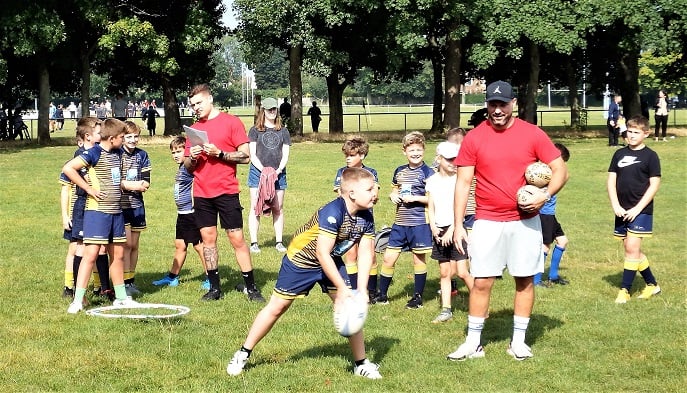 First team manager and newly appointed Club Trustee, Michelle Mclean, was on a nearby stand doing a good trade in club leisure wear. Thanks to her and all volunteers who ran the activities during the morning which included three first teamers, Jimmy Green, Marius Thompson and team captain Sam Taylor, who, with the assistance of Bill Wallace, had run the whole club warm up to start things rolling first thing in the morning.

There are too many volunteers to list individually,  thanks to them all with special mention for  Geoff Redmond, Tom Carlier and John Keohane of the Paul Keohane sports fund whose help in organising the event was of immense help to Peter Ruranski who masterminded the morning. Thank you to Kelly and the clubhouse team but above all thank you to the coaches and the young players without whom their efforts would have been in vain. 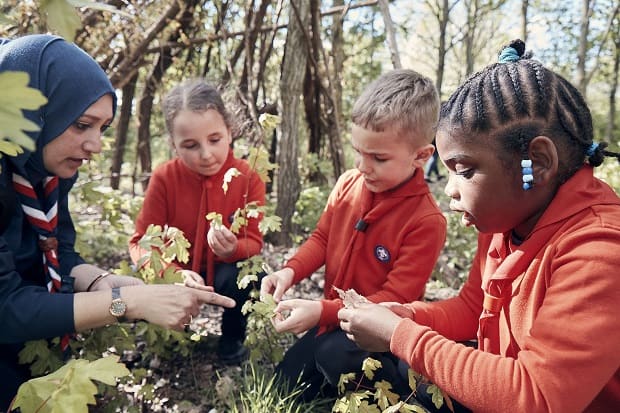 Scouts have launched a new programme tailor-made for 4 and 5 year olds – Squirrels.  Squirrels get to be active, explore nature and have fun learning outdoors with friends, like all other Scouts. To roll-out the programme UK-wide, grown-ups are being called on to volunteer to give young children a chance to thrive after the pandemic.

Squirrel Dreys will be open in more than 200 locations across the UK, with priority given to those communities most affected by the pandemic. This builds on a successful pilot programme, which has particularly flourished in Black, Asian and other minority ethnic communities and areas of deprivation. Squirrels will reach at least 12,000 families in the first three years.

The emphasis for Squirrels will be on having outdoor adventures, making new friends and learning new things, recognised by a new set of badges. Squirrels creates a positive, safe environment for young children to develop, as they learn essential skills for life.

New Squirrels will get to learn new skills and meet new friends while pitching a blanket tent, planting seeds or learning how to spending 50p in a local shop. The programme is crafted to help them develop teamwork, communication, creativity, community awareness and other core skills. New badges that Squirrels can earn will include Feel Good, Be Active, Explore Outdoors, Brilliant Builder and Exciting Experiments.

To support the expanded programme, Scouts are calling for grown-up helpers to step forward as part of its #GoodForYou campaign. Scouts want to recruit over 5,000 new volunteers. Volunteering for Scouts not only helps young people, but is good for adults too, supporting wellbeing and building skills for employment.

The development of Squirrels section was supported by the #iwill Fund, The Department for Education and the Charity of Sir Richard Whittington (for which the Mercers’ Company is corporate trustee). The #iwill Fund is made possible thanks to £54 million joint investment from The National Lottery Community Fund and the Department for Digital, Culture, Media and Sport (DCMS) to support young people to access high quality social action opportunities. Scouts is acting as a match funder and awarding grants on behalf of the #iwill Fund.

Leading charities have linked with Tesco to launch a campaign to raise much-needed funds to help people in Thanet lead healthier lives.

Tesco stores in Thanet are coming together to support the Tesco Health Charity Partnership and raise money for Cancer Research UK, the British Heart Foundation and Diabetes UK from 13-26 September.

Tesco customers can make a donation by rounding up the amount they spend in stores to the nearest £1 at self-service checkouts. All funds raised will go directly to the three charities, which are part of the ‘Helping you to live healthier’ partnership.

The partnership aims to inspire, empower and support Tesco colleagues, customers and their families to make healthier food choices and live healthier lives.

It is hoped that this will help people to make sustainable lifestyle changes that can help lower their risk of cancer, heart and circulatory diseases, and type 2 diabetes.

Support from Tesco customers at this critical time will help each charity continue its vital work to save and improve lives.

The partnership will also share trusted, health information and advice to empower Tesco customers to take small steps to help improve their health.