A new trail has been launched as part of the Vincent in Ramsgate project.

The trail called ‘Following in the Footsteps of Vincent van Gogh’ has been created using extracts from the artist’s letters to his brother Theo, which were written during his short stay in Ramsgate during 1876.

Vincent van Gogh (1853-1890) arrived by train in Ramsgate on Sunday, April  16,1876, and only stayed for a few months but in that time, he wrote around ten letters to relatives and described his life in Ramsgate most favourably, saying ‘These are really happy days, the ones I’m spending here’.

The time he spent in Ramsgate appeared to have a lasting impression on the young man who referred to it in a later letter to his brother, ‘If you cannot love a person, love the place in which you live, don’t I love Paris and London even though I am a child of the pine-woods and that beach at Ramsgate?’

In 2019, Ramsgate Society and Ramsgate Town Team joined forces to make the most of the  Vincent van Gogh sculpture created and gifted to the town by Anthony Padgett, who donated seven sculptures to various towns across Europe where Vincent’s story was created. Ramsgate’s sculpture was installed at Spencer Square.

The organisations made a joint application to the Heritage Lottery Fund to support an unveiling event for the sculpture installation, fund an information board in Spencer Square, hold art workshops and put on a Vincent in Ramsgate art exhibition at the Churchill Tavern, formerly known as the Van Gogh Pub (1961-1983).  The remaining funds have been used to create a walking trail and a ‘Vincent in Ramsgate’ book which will be published later this year.

The project has been embraced by many members of the creative community over the past two years including Jim McGarry who created postcards, logos and posters, Jacqui Ansell – author of the soon-to-be published book, Vincent in Ramsgate – and Keith Ross of Critical Art who designed the new trail leaflet. 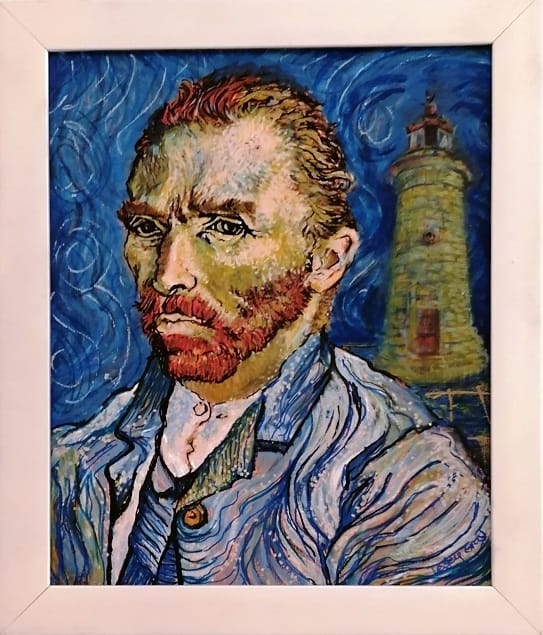 Local artist, Lesley Gray’s Vincent and Ramsgate Lighthouse image (above) features on the front cover of the new trail.  The original painting by Lesley is currently for sale (£120) and if anyone is interested in purchasing it, contact info@ramsgatetownteam.org.uk Profits will be donated to Arts in Ramsgate.  The new book is being produced by Graeme Campbell Design who is working with Jacqui Ansell on the final draft ready for its release.

The new Trail Leaflets printed by Sharp Printing can be picked up at Ramsgate Visitor Information Centre at Custom House, Harbour Parade and various locations across Ramsgate.  It will also be available from Droit House and Broadstairs Visitor Information kiosk from next week.

To find out more about the trail and download the pdf, head over to https://www.visitramsgate.co.uk/the-vincent-van-gogh-trail-in-ramsgate/

Jacqui Ansell, art historian and educator will be delivering an online talk about Vincent in Ramsgate on August 31 at 6pm as part of the Ramsgate Festival of Sound.

Tickets cost £2 and are available from https://www.tickettailor.com/events/ramsgatefesivalofsound/563029#