Thanet council and MPs and the chief executive of Southern Water Ian McAuley met yesterday (June 22) to discuss the impact of the wastewater release from Margate’s pumping station last week.

The incident, overnight on June 16/17, was caused by a lightning strike. Southern Water says the strike caused a power outage and also disabled the telemetry systems, causing the discharge via the outfall. Power was restored to the site via power from the emergency generator but not in time to help the telemetry to control the site as intended.

It resulted in a release from the outfall pipes into Palm Bay and Margate Sands which has impacted the majority of Thanet’s coastline.

Today (June 23) advice remains not to enter the sea or the area of beach below the high water mark 11 Thanet beaches and bays:

Signs remain in place at these beaches to inform members of the public.

A Thanet council statement says: “Thanet District Council teams remain out to assess the coastline. Although ongoing visual inspections have shown an improving picture, there is still evidence of an impact around the coast.

“Operational meetings are taking place on a daily basis to continue to assess the situation.” 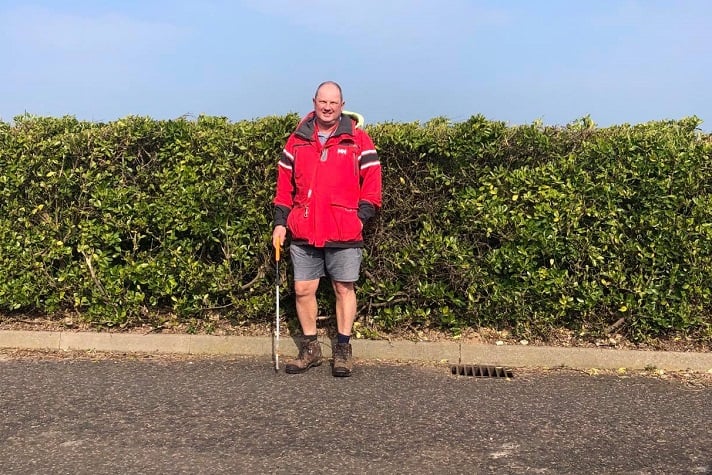 Barry Manners, from the Friends of Botany Bay and Kingsgate group, says wet wipes and other contaminants are still littering the beaches and being swept in and out by the tide.

Two volunteers from the group were at Kingsgate yesterday and said they collected “too many to count” wet wipes and sanitary towels on the falling tide.

Barry said the volunteers had seen “no sign” of Southern Water cleaners.

He added: “Where are the cleaners? We have 11 affected beaches and bays, litter pickers should be out there on all those beaches. There were sanitary towels covering Walpole Bay yesterday and Botany Bay.

“This is just like last time when it was left to volunteers to clean up and then when we asked for a donation towards our work – cleaning up Southern Water mess – they said they had no budget.”

Members of the group were among those to attend a protest march to the pumping station on Sunday (June 20). Thanet Green Party members, Surfers Against Sewage, a Travellers community representative, Margate ward councillor Rob Yates and many more also took part to show their anger at the environmental and financial impact of the incident.

Cllr Yates had called on Mr McAuly to visit Margate to discuss the compensation to businesses and update residents on the clean up.

MP Craig Mackinlay said: “Southern Water blame a lightning strike for the failure. I do appreciate the ‘act of god’ nature of lightning but the questions I am asking are whether there were industry standard mitigations against such an event – simple things like lightning conductors, sufficient uninterruptible power supply back-ups and whether the capability and design of the pumping station is at all fit for purpose.

“This is not the first time that Southern Water has let us all down – there was a failure at the Broadstairs pumping station in February resulting in effluent washing up on Joss Bay. This latest event is significantly worse with eleven of our beach hotspots affected. This simply won’t do.

“Southern Water have been fined repeatedly over the years for various failures; I hope the Environment Agency uses the full extent of its powers to come down hard on a company that seemingly cares little about its own corporate reputation, the businesses affected and the tourist appeal that our Blue Flag beaches have as key assets of our area.”

Thanet council’s leader says a pledge has now been made for further ‘community support’ on Thanet beaches by Southern Water.

Following yesterday’s meeting  leader Cllr Ash Ashbee said: “Having expressed my strongest possible concerns to Southern Water, I’m delighted to confirm that a scheme of compensation is to be provided for local businesses impacted by the recent incident. We need to ensure that this is fair, proportionate and easy to access for those so adversely affected and we will be seeking assurances that this will be administered quickly.

“I’m encouraged that the significant efforts of the council are also to be recognised by Southern Water and that arrangements will be made to cover the costs of our response. I am proud of the swift action taken by our officers, but at a time when resources are so stretched this is something the public purse can ill afford.

“A commitment to provide further community support over the weeks ahead on our beaches is welcomed too. This needs to complement the vast activity undertaken by our dedicated volunteers right across the district.

“Finally, I will continue to seek assurances that Southern Water will be taking every measure possible to ensure the district is not exposed to this risk again. Act of God or otherwise.

“A briefing will be held with district councillors to update the council on progress and I will ensure that residents are kept updated.”

Business owners affected by this incident are advised to make a claim by emailing Barry.Woodham@southernwater.co.uk