There’s government money around for poorer bits of the UK and Thanet has the chance to get hold of some of it. Lucky us. Somehow it’s been decided that Ramsgate will probably get a big chunk of the Thanet allocation.

But how is it to be spent?

You won’t be surprised to learn that consultants have been called in to help. I mean, nobody local could possibly have the skills to talk to fellow residents and ask them what they want.

I went to the first drop in, which was about accessibility for disabled people. It was all a bit last minute as Access Thanet, our local disability campaign group, only heard about it from a member in Margate, but being disabled we do have time for afternoon meetings, so two of us went along. As far as I could see there were nine people altogether, five people with disabilities or carers of disabled people, three consultants and councillor.

This initiative is called “levelling up”.

Unfortunately one of the group of disabled people thought that “levelling up” meant that literally – as in flattening Thanet. This would be ideal for anyone in a wheelchair or who finds steps difficult. But no! It means working out how we deprived areas can get to the same level of prosperity as more affluent regions.

But we had the ear of the consultants so we ploughed on.

We had lots of complaints and lots of good ideas. For wheelchair users, our streets are full of potholes, narrow pavements and a terrible lack of dropped kerbs, or broken dropped kerbs. One contributor had been tipped out of her wheelchair with a dropped kerb that had crumbled and become a pothole. She thought that a very simple measure would be to give each dropped kerb a number so damaged or blocked ones could be reported.

Dropped kerbs are very controversial in the world of disability. Wheelchairs can’t climb kerbs or steps anywhere. So, crossing roads becomes impossible if there are no dropped kerbs on each side. Same problem for anyone with a baby in a pushchair. But an adult in a powered wheelchair is a much heavier proposition, and is probably in the wheelchair because their bones are painful or vulnerable, or in the wrong place. So any shaking or bumping on obstructions, is very unwelcome. 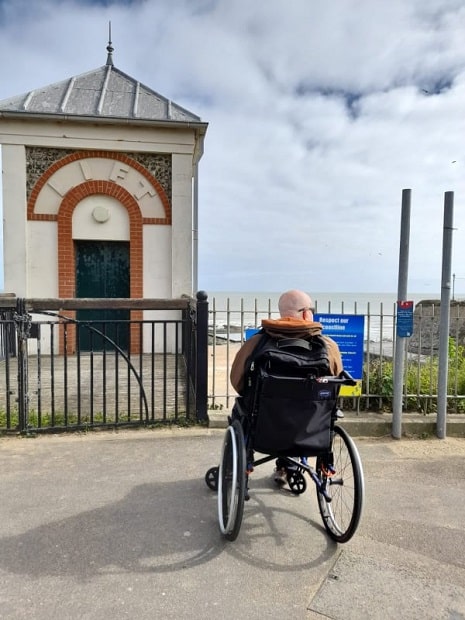 Neither wheelchair users or stick users like cobbles, they shake us and trip us up and are generally a pain. And, as it turns out, it’s not even an historic feature of Thanet! People think they’re historic and picturesque but the pains, to me, much outweigh any picturesqueness.

Same with listed buildings. I was once told by a cafe that they couldn’t put in a handrail on the stairs to their basement section – where the toilets were – because the building was “listed”. I suggested answers, rope with attachments to the wall etc, but in my head I was vowing never to go again.

That’s what consultants need to take onboard: the disabled and elderly are a large potential market for Thanet and would flock here if they felt welcome.

We want access to our beaches, lifts that work, walkways across the sand, handrails into the sea so people who find walking hard or lose their balance easily can get into the waves. We’ve seen good infrastructure in European resorts, (even Turkey does it better than us) and we want it here.

Increased visitor numbers means more income for our towns. Make our transport, beaches and facilities accessible and welcoming for all ages and abilities and do a bit of real levelling up in our streets, and we won’t have to worry about being poor and deprived.

But what we suspect might happen is a lick of paint for shopfronts, a lot of lip service commitment to consulting disabled people for the future. And, almost certainly, lot of money spent on consultants.