Protesters have gathered outside the Thanet council offices in Margate to show their anger over the latest discharge of wastewater into Thanet’s beaches.

Eleven of the isle’s beaches and bays have been affected by the discharge and advice against swimming in the water at these sites remains.

The wastewater was released via the emergency outfall into Palm Bay and Margate Sands. during the storm on Wednesday night/Thursday morning.

Southern Water says this was due to a lightning strike at the wastewater pumping station which caused a power outage and also disabled the telemetry systems, causing the discharge via the outfall. Power was restored to the site via power from the emergency generator but not in time to help the telemetry to control the site as intended.

Among those at today’s protest – organised by the ACORN Margate group – is Margate Central ward councillor Rob Yates who said Southern Water’s chief executive should come to Margate and provide an update on the situation. 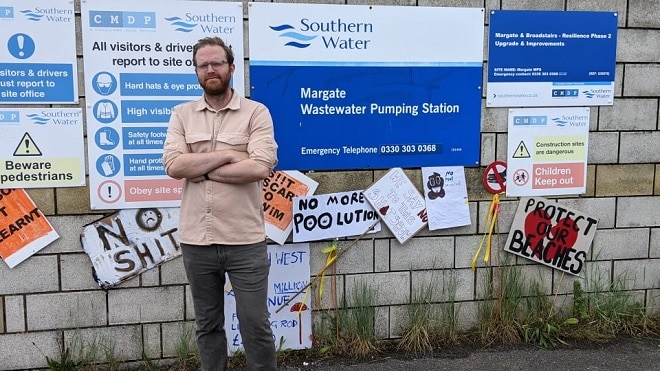 Cllr Yates said: “I formally invite Ian McAulay to come to Margate and update the council on this terrible situation. He needs to provide an update on the clean up, an update on their technical fix, and a clear compensation link for businesses who have lost trade due to their mistake.

“There needs to be accountability for these situations and the decent thing for the chief executive of Southern Water to do is to come to Margate and explain himself in person, I’m sure he can claim expenses for the journey.”

The protesters say they want Southern Water to: 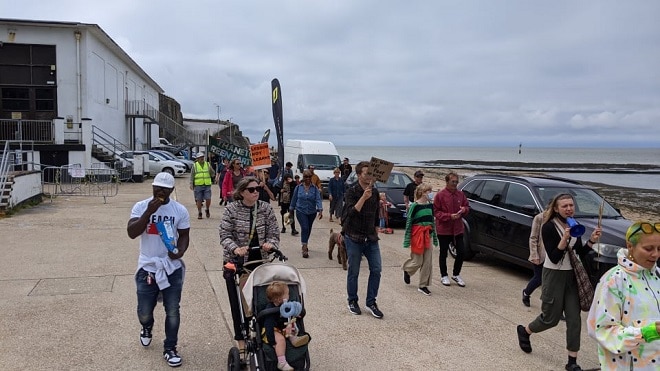 Compensate customers in Thanet who pay for water treatment, management and appropriate disposal.

Commit to investing in infrastructure at Foreness Pumping Station so that this never happens again.

This morning (June 20) Southern Water issued a statement to say a compensation scheme is open and investigation into the wastewater release continues.

Dr Nick Mills, Head of Pollution and Flooding Resilience at Southern Water, said: “No pollution is acceptable to us or our customers and we apologise for the impact the latest incident has had on local residents, businesses and the environment.

“We are dedicated to protecting the environment and reducing pollution incidents is a top priority for us.

“We have invested £3.2billion across our region in the last six years to improve the capacity and efficiency of the wastewater network and will continue to do, with a  further £1.7billion committed for the next four years.

“As part of the Government’s CSO Task Force we are committed to tackling this national and complex issue and we are leading the way with the publication of our comprehensive Pollution Incident Reduction Plan last year.

“Wastewater releases at times of heavy rainfall happen across the UK to protect properties from flooding. The release that happened overnight on 16 June was caused by a combination of heavy rainfall and lightning strike during the storms which caused a short power failure and affected systems on site at our Margate Water Pumping Station.

“ Back-up generators are in place. As part of our preparations for the predicted thunderstorms and heavy rainfall we also had a team standing by in the area. These additional precautionary measures meant we were able to immediately begin work restoring the site to full operation.

“Unfortunately, we had to make this emergency release to protect local homes and businesses from internal flooding.

“Our investigations into this incident are ongoing and we continue to work closely with the Environment Agency and Thanet District Council. We continue to monitor the coastline and clean-up after each high tide.

“A compensation scheme for businesses is available and business owners affected by this incident can make a claim.”

Southern Water says it is already liaising with affected businesses and says anyone who has not had contact can call the usual customer line and staff will help them start the claim process.

In 2019 Southern Water agreed to pay £126million in penalties and rebate payments to customers following serious failures in the operation of its sewage treatment sites and for deliberately misreporting its performance during 2010-2017.

In the course of a large-scale investigation into the water company, Ofwat found that Southern Water failed to operate a number of wastewater treatments works properly, including not making the necessary investment which led to equipment failures and spills of wastewater into the environment.

Ofwat also found that Southern Water staff manipulated the wastewater sampling process which resulted in misreporting information about the performance of a number of sewage treatment sites. This meant the company avoided penalties under Ofwat’s incentive regime.

The £126m package meant Southern Water paid a rebate of £123m to customers through their bills and  a fine of £3m.

The rebate included £91m in penalties Southern Water had avoided and a further £32m of payments as recognition of their serious failures.

Following the incident Southern Water appointed a new Chief Executive and made substantial changes to the company’s management team. The company introduced and committed to new governance arrangements to support accurate monitoring and reporting, and a programme to change the company’s culture. Investment was made into the failing treatment sites with £100m invested in IT systems and processes and £26m invested in wastewater assets.

Last year volunteer litter pickers from the Friends of Botany Bay and Kingsgate spent more than 100 hours over the six weeks following a similar sewage incident picking up thousands of wet wipes, tampons and other waste.