Officers investigating the reported theft of items from a protected aeroplane wreckage at Sandwich Bay have released an image of a man who may be able to assist their enquiries.

Kent Police received a report that items were removed from the crash site of the B-17 plane at some point between 28 and 29 May 2021.

It is alleged that excavating equipment was used to remove part of the infrastructure of the aircraft.

The B17 Flying Fortress bomber ditched on the Sandwich flats during World War Two – on December 1, 1943. There were no crew losses.

The American craft has remained in situ ever since but has been subject to some looting of pieces.

Enquiries into the report are ongoing and officers have released an image of a man who may be able to help the investigation.

Historic England, the Receiver of the Wreck, HM Coastguard and a department of the Ministry of Defence have also been informed of the looting.

Ramsgate’s Tony Ovenden, who is a coastal warden, a founder of the Sandwich Bay B17 site and a metal detecting enthusiast, was one of those to report the thefts.

He previously told The Isle of Thanet News that there has been noticeable pilfering from the site over recent months.

He said:  It was noticeable that items were missing. At first I thought this was due to the tide but it was after two Covid lockdowns that I noticed something did not seem right as visits to the site were not as regular.

“Recently I noticed areas of solid structure were missing around the right wing. Two Tokyo tanks have gone along with pipes and wiring. There is evidence of tampering and disturbance of concreted items in the debris field.

“I was coming to the conclusion that someone had taken items off the site in a big way. (Last month) I saw someone out by the B17. I thought he was one of my group but he was in the water pulling at something in the fuselage area. Nearby was a small four wheel trolley. When he saw me he walked off. 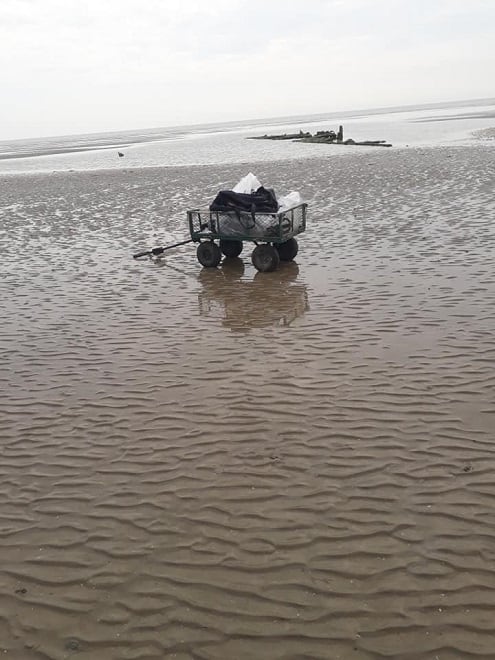 “Looking in his trolley I could see B17 items and lumps of concretion he had been picking up from the debris field. I have reported this incident.

“There is now enough evidence to suggest the site is at risk, not so much from small souvenir hunters but collectors motivated by greed. The area may not look much but there are still some very significant aviation archaeological items remaining, like a perfectly preserved tyre and landing gear of the left wing.

“Some more Tokyo tanks have been revealed due to the break up of the right wing. It is at risk from looting as it probably one of the few remaining B17 sites in western Europe where someone can just walk up to and basically help themselves to a piece.

“The profile of this site really needs to be raised, not left to the mercy of the elements and looting.

“The Receiver of Wreck is taking this seriously. The local coastguard is investigating as there is more than one witness report regarding the recent incident.”

You can also contact the independent charity Crimestoppers anonymously by calling 0800 555111 or using the anonymous online form at Crimestoppers-uk.org