I got my first proper pay packet when I was seventeen, working in school summer holidays in the office of the MEB, the Midlands Electricity Board. To me “bored” would have been a more suitable description. Filing, filling in meter readings in triplicate and sending out forms to customers for unspecified reasons.

When the wages came round the other workers made a big deal out of me getting my first wages ever. I think it was about £4 (well, it was 1962). But I wasn’t pleased. I was weirdly ashamed and embarrassed. I’d spent a week hating bits of paper, watching the clock for 5.30 when we’d be released and vowing never to get an office job when my “real” life started.

It seemed wrong to get money for such worthless activity that I felt completely uncommitted to and couldn’t wait to get out of. Plus I felt guilty that I had saintly friends who had gone off at the same age to be junior nurses – at less pay than me.

But how should we measure the value of work? Do we pay people more for being bored to death, less because it’s low skilled work or much more because it’s saving lives or looking after vulnerable people?

How should we reward people in jobs we all agree should be done by people committed to doing them well, and on which our lives or the lives of our loved ones might depend?

Emptying bedpans, cleaning up blood and vomit, taking on the anger of confused sick people – you want people dealing with it who are valued by their community and aren’t going to walk out when it gets tough. 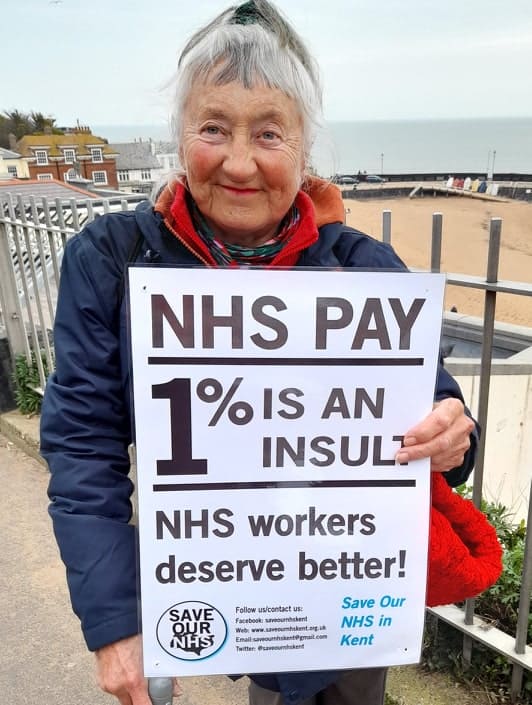 The government has offered nurses a 1% pay rise. Hurray! All other public sector workers have had a pay freeze. But only 1%? On average nurse’s pay that means around £3.50 per week – not enough for a nice M&S sandwich. I know because I spent a lot of time hanging around St Thomas’s hospital in London a couple of years ago waiting for fantastic medics to save the life of my partner and living on M&S sandwiches.

The nurses in Intensive Care were working thirteen hour days, managing complicated machinery and desperately ill patients, with cheerfulness and optimism. These same people have been flogging themselves for a year now caring for victims of the pandemic, catching the virus themselves and sometimes dying from it.

But it’s not just in intensive care that workers need to be committed, and have been stressed and overworked by the covid crisis. Everyone who works in the NHS or social care has been on the front line – as we all acknowledged when we went out on our doorsteps to clap them.

What happened to that supportive spirit? Are you going along with the  line that a healthcare job should be treated as mine was in the MEB – that it’s just a job that you plough your way through to the end of your shift and needs no commitment to quality or public spirit, you just do what you’re being paid for? And be glad you’ve got a steady job with a pension – as one member of the House of Lords said recently. He turned up presumably for his £300 daily allowance and a better lunch than an M&S sandwich, in order to say just that.

Billions have been spent on a failing track and trace system. Can’t we find a better use for those billions?

Shouldn’t we be paying people prepared to do extremely challenging and socially vital jobs as if they are the most valued members of our community?

You can’t pay people who spend their time saving lives or looking after the most vulnerable anything that equates to their social value, but you can at least pay them what they ask for.

Don’t trade on people’s commitment to pay them less.

Let’s pay the nurses whatever they think is fair!