A councillor who served Ramsgate with determination, passion and humour has sadly died.

Peter Campbell passed away this morning (February 17) at Pilgrims Hospice, aged 71, after a period suffering with cancer.

Peter had served on both Thanet district and Ramsgate Town councils since being elected in 2007.

He was known to many for his wit and always brought both knowledge and humour to council proceedings.

Passionate about his home town, the Central Ward councillor campaigned to make Ramsgate a better place for its residents and was instrumental in the purchase of the former fire station by the town council.

Thanet council and Labour Party leader Rick Everitt paid tribute to his friend and colleague, saying: “Peter had been a Labour councillor for Central Harbour ward in Ramsgate since 2007 and he absolutely loved the role.

“In return he gained the respect and affection of officers and elected members across TDC for his absolute dedication to serving residents. He was still answering their emails from his sickbed at the end.

“Peter kept a high profile in the town and was knowledgeable, fearless and often very funny. To me he was a very good friend and a smart political adviser. He never engaged in factionalism or wasted time on internal arguments. The local Labour party and the district and town councils will miss him terribly, as will my partner Corinna and I on a personal level.”

Ramsgate mayor Raushan Ara has also remembered Peter, who was chairman of the town council, as a “mentor and dear friend.” 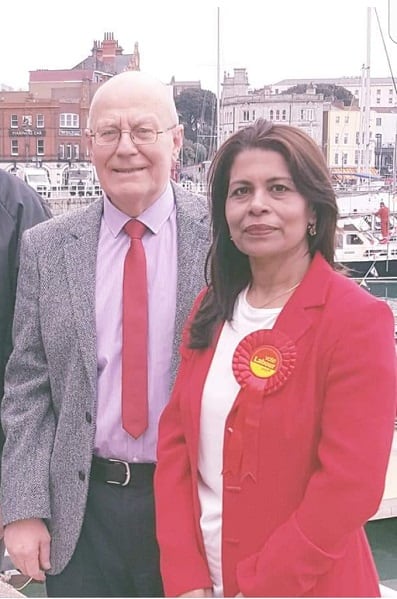 She said: “This is a great loss for TDC, RTC , the Labour Party and the people of Ramsgate.

“Peter was a hard-working, dedicated, kind councillor. He always fought for Ramsgate, and his knowledge of politics was second to none. He was both a mentor, and a dear friend, to me. My condolences go out to his wife, Mitzi, his family, and friends.”

“Peter had been ill for some time but had fully kept up his duties as Chairman and Councillor at Ramsgate Town Council right to the end. He bore his illness with humour and great fortitude, which I think says much about his strength of character.

“He was one of the seminal influences in guiding the Town Council from its birth to its current position as an active organisation within the community in Ramsgate. He will be very much missed by me as Clerk, my staff, and all his colleagues on Ramsgate Town Council.

“He was of course an active, well respected Councillor on Thanet District Council and I am sure they will wish to make their own tribute on his life and work.

“He was a very active Councillor and Chairman, with an attendance record second to none. He took his responsibilities seriously, but these were often leavened with a great deal of humour and kindness.

“He was very helpful to new Councillors in using his great experience of local govt procedure, to help them understand some of the intricacies in the working of both councils.  As a mark of respect, the Town Council will be flying the Town flag at half-mast.

“The Council would like to express their great sadness and condolences on Peter’s passing, to his partner Mitzi, and the other members of his family.”

Broadstairs councillor Aram Rawf also paid tribute to a friend who was “generous and fair,” adding: “He had Ramsgate and Ramsgate people in his heart. His generosity, fairness and of course great sense of humour will stay in my mind.”

Former councillor Jenny Matterface said: “Peter was enormously helpful to me from my first meeting in 2011 until I ended my second term as a councillor in 2019.

“His knowledge was amazing and I can’t think of a time when he couldn’t answer a question or point out what the procedure should be. His sharp mind and quick wit brought humour to many meetings. He will be missed by members of all parties.”

Many other friends and colleagues from across the political spectrum  have paid tribute to Peter as a “gentleman” and “an inspiration.”

Peter leaves behind his partner Mitzi, his children, grandchildren and family as well as many friends.