Concerns have been raised about the mental welfare of Kent NHS staff working in “war-zone” conditions amid the second wave of the pandemic.

Pressure on the county’s seven main hospitals has remained “extreme” over the last 12 months, since the coronavirus outbreak initially struck the UK.

At least 2,342 residents have had COVID recorded on their death certificate since the first wave, as hundreds of families have lost loved ones during the pandemic.

More than 1,200 patients are currently hospitalised in the county with serious symptoms, including low oxygen, after the virus mutated in Kent last year. This is more than double the first peak where 600 beds were occupied from March to June.

Kent and Medway Clinical Commissioning Group’s (CCG) executive director of health improvement, Caroline Selkirk said: “The pandemic has been one of the greatest pressures we have ever seen in the NHS.”

At Kent County Council’s (KCC) health scrutiny committee meeting, she also said: “There has been extreme pressure over a very prolonged period and I would like to acknowledge the hard work of our staff and key workers.”

Concerns have been raised about the mental toll of Covid on frontline NHS staff working in the emergency departments of intensive care hospital wards amid their “monumental” effort.

Folkestone and Hythe District Cllr Patricia Rolfe (Con) has called for more help for those suffering from post traumatic stress disorder (PTSD). She said: “This in many cases is like a war zone with the number of casualties.”

CCG bosses said online counselling support has been offered and mental health services continue to be provided by the Kent and Medway NHS and Social Care Trust. 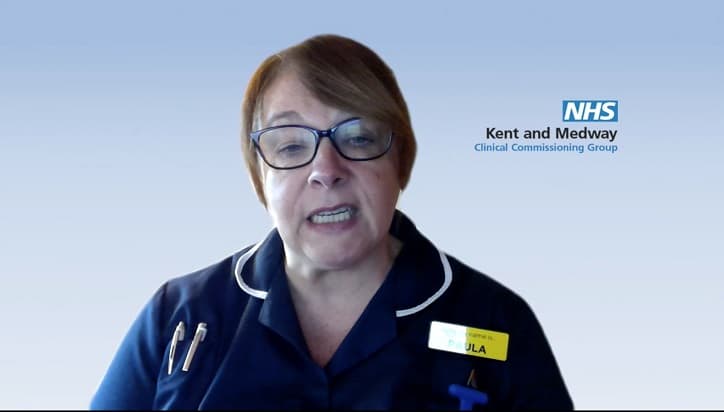 However, Paula Wilkins (pictured), who is the Kent and Medway CCG’s chief nurse, said intensive care unit (ICU) staff are “too busy” to access the support needed.

After speaking to hospital workers on a phone call yesterday, she told the panel: “We are looking at what we need to have in place for the future.”

More investment has been promised into expanding the capacity of mental health services for NHS staff by the UK government, she added.

At the County Hall meeting, Ms Selkirk said Covid hospital admissions will likely rise in Kent over the next few weeks, despite case numbers falling by 54% since the third UK lockdown was announced on January 4.

Around 6,300 residents were diagnosed with the virus over the last seven days, compared to around 10,000 at the beginning of the month. Kent’s infection rate is below the national average, with 397 cases per 100,000.

This will not “translate” into less pressure for the NHS, CCG bosses warned during the online KCC debate, overseen by a panel of Kent county councillors.

Ms Selkirk, whose organisation oversees health care across the county’s 13 districts, told the panel: “We continue to have lots of people in our critical care beds and people who require oxygen.

“It is good to see infection rates are falling, nonetheless the consequences of those cases will be pressure on our hospitals. It will take some time to recover from that.”