Twelve new ‘TidyPac’ stations are being installed along Margate seafront in a partnership between Thanet council and community litter action group, Rise Up Clean Up Margate (RUCU).

The stations are similar to the existing Tikspac dog waste bag dispensers, which were installed by the council across the district in 2016. The latest stations however are much larger in size, and provide a free recycled plastic bag to encourage people to collect litter instead. The aim is to normalise the idea of litter picking and encourage everyone who visits the beach to do their bit.

As part of the project, RUCU has created eye-catching designs so the stations are easy to spot. Residents and visitors can expect to see eight of the 12 stations being installed at various locations along Margate Main Sands from today (January 22). The success of the first set of stations will be monitored in the coming weeks and a decision will then be made on the best locations for the remaining four stations.

Cllr Steve Albon, Cabinet Member for Operational Services said: “These new litter stations are a great way to help us find solutions to prevent litter being left on our beaches. We hope they will act as a very visible reminder that anyone who comes to our beaches should pick up after themselves as all too often rubbish is abandoned with the expectation that it’s someone else’s job. It’s not.

“Working together with RUCU to tackle some of the litter issues we experience in Thanet is a very positive step forward for our community. We’ll be monitoring how successful these initial stations are with the hope to explore the possibility of installing more across the rest of our 19 miles of coastline.

“Thanet has a unique natural coastline and is part of a designated marine conservation zone – any litter not placed in bins properly is likely to end up in the sea!”

Alanna McGill-Tagg, Rise Up. Clean Up. volunteer said:“The RUCU organised litter picks began back in summer last year, as a response to the sheer volume of litter being left on the beaches every day during the peak season. Even during winter and in lock down, at each clean we’re still pulling roughly 20 bags of litter off the beaches and surrounding areas.

“The organised picks are a fantastic way for the community to come together and clear a huge amount of litter in one go…but what about in between the organised picks? With the TidyPac stations, we’re hoping that people will take and fill a bag each time they go for their walk on the beach; a little, but often approach.

“Huge thanks to everyone who donated to the crowdfunder and also to the brilliant teams at Thanet District Council and TiksPac who helped make this possible, and of course to the Margate community!” 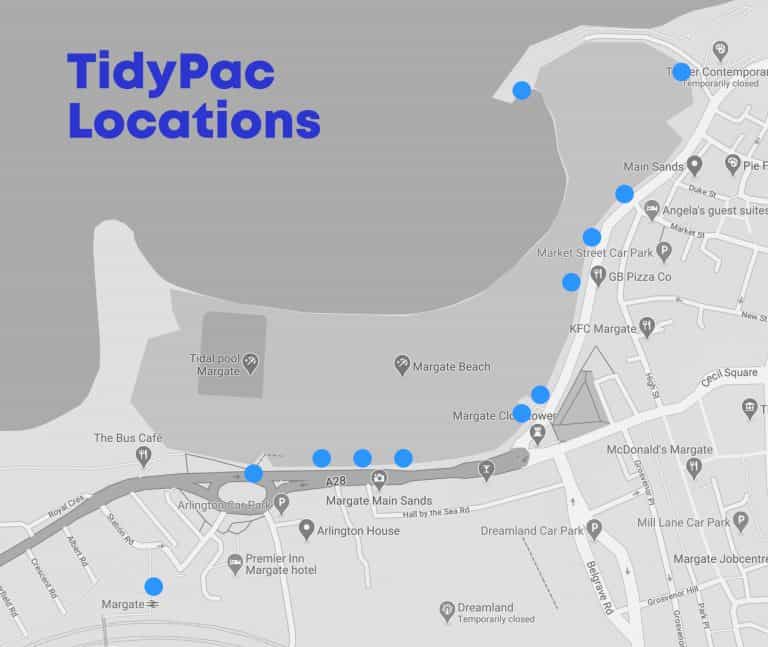 The funding for the project has come from a crowdfunding campaign led by RUCU, together with a £500 contribution from Thanet District Council. The council is also coordinating the installation of the stations along the seafront.

Rubbish installation, re-usable pint glasses and a litter pickers’ online shop – some of the proposals from Rise Up, Clean Up