A street football organisation based in Margate has created a film to shine a spotlight on talented Thanet youngsters who are among some of the best players of the game in the UK.

YO! Street Zone, founded and coached by Yofi Yvorra, teamed up last Summer with local cameramen Luke Ogden and Jamie Boswell to create film Where Ballers Are Born.

The film, which premiered online on January 1, portrays the work YO! Street Zone does in the community, and showcased its crew, highlighting that some of UK’s best panna and street football players started with the group in Margate.

Some of the filming locations included Quarterdeck in Margate, Dane Park football court, Arlington car park, the steps of Margate Main Sands and the harbour arm.

Yofi said: “The video features our whole crew, including 12-year-old Anna from Cliftonville, who started training with YO! Street Zone two years ago and landed a viral video in July 2020, where she nutmegged (play the ball through the legs of an opponent) an adult on Margate steps.

“This had over 30 million views online and was featured on national television news as well as in The Isle of Thanet News.

“It also features nine-year-old Ralphy Holloway, who started training with YO! Street Zone in 2017 and who has also gained a lot of attention since the beginning of the lockdown by posting many videos featuring his football skills on Instagram, amassing millions of views.

“For me, as founder and coach, it is amazing to see that my work with YO! Street Zone has turned this small seaside town into the hotspot of panna and street football in the UK, recognised by the street football community worldwide.”

And there is more positive news with YO! Street Zone being awarded National Lottery funding from Sport England’s Tackling Inequalities Fund. 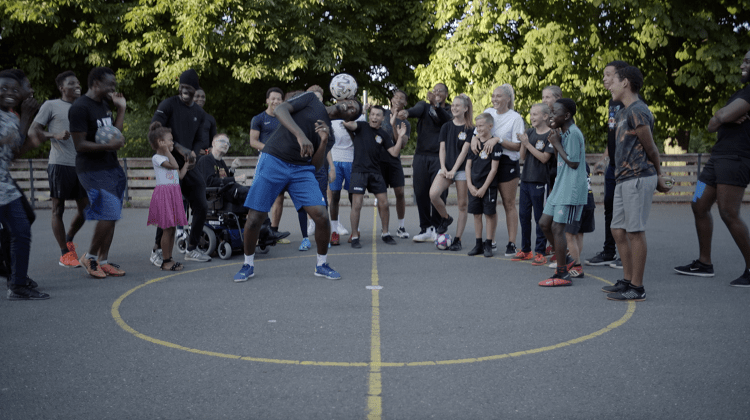 The fund aims to tackle inequalities in activity levels and to reach those most in need as a result of the impact of COVID-19.

The funding award will allow YO! Street Zone to run weekly street football sessions in Dalby Square, Cliftonville, engaging children and young people from various ethnic and social backgrounds in street football and one on one  panna matches.

Find out more at yostreetzone.com