From walking across the scorching Sudanese desert to shivering with cold in the Calais Jungle, Osam Bitek was just a child when he travelled solo from Eritrea to the UK in search of a better life.

Aged just 14, he says the journey “wasn’t easy” but he persisted with dogged determination to achieve his dream of becoming a designer.

Now, after studying hard at East Kent College he has impressed top Cliftonville architecture practice, Ratliff Landells with his aptitude and creative flair while undertaking work experience there.

The 18-year-old is humble about the three-month voyage to get here. “It wasn’t an easy journey but was compared to others. I spoke to my family about leaving as there are no opportunities and I wanted to live. Since the age of 1, I have always been drawing.My mum said to me ‘you have to live your life.’ There are no opportunities here for young men, just military service.”

After making the brave decision Osam walked for four days across the desert to reach Sudan where he then remained in a house for four weeks while an uncle tried to negotiate safe passage to France.

He explained. “I speak Arabic but there are many different dialects and accents so I couldn’t communicate with anyone. I made friends with an older and very kind man so I practiced speaking with him everyday. It was dangerous to leave the house.”

Unlike many other desperate migrants who travel by boat Osam managed to board a flight to Paris and it’s only since speaking with others who have made similar journeys that he realises the risks involved. “I was so lucky. I saw a lot of suffering but this is a new chapter in my life and I was very fortunate not to take a boat,” he said.

After arriving in Paris, Osam was then taken to the infamous Calais Jungle in the dead of night as the rain poured. “I slept on the floor. I remember when I awoke a horrible feeling. I thought ‘why am I here?’ and ‘what have I done?’ It was cold and there was violence over food as people were desperate. The time I was there I just kept thinking about that first night,” he said.

After a few weeks Osam managed to scramble aboard a lorry and was settled with a foster family in Aylesham. “I didn’t contact my family while I was in France as they would have been worried. I spoke a little English so that’s why I came here. It’s weird I returned to Paris as a tourist last year and it felt very strange. I’d tried to forget but coming on the train I was reminded,” he said. 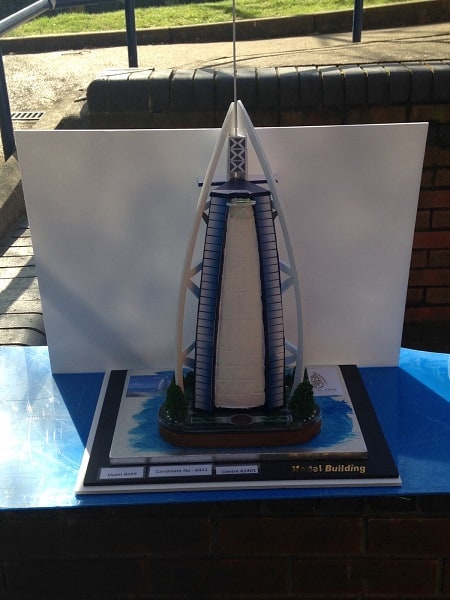 For the little boy who loved to draw maps and buildings Osam grabbed every opportunity he could, being awarded distinctions at East Kent College for his stunning model work of Dubai building Burj Khalifa (above). He was working on a project to re-create Margate’s Old Town before the pandemic struck.

Through the college he was then put in contact with Arts Emergency, a charity that has a mentorship scheme in Thanet, which in turn arranged the work experience placement.

Firm Partner, Tamsin Landells says not only is Osam naturally talented but his whole ethos and aptitude to learn is very impressive. She said; “We only had four days so it was difficult to start him on a project but we were keen. We’d been thinking for a while that our meeting room was uninspiring so we set him a brief to redecorate it, overseeing it from start to finish. We were so impressed: he got that we liked bright colours and he was really hardworking. He has a natural eye for design.”

She added: “We’d like him to come back for a few weeks and see one of our projects and to get to work on CAD (architect design system).”

Osam has not been able to return to see his family due to unrest in neighbouring Sudan and because of the pandemic. But ever the grafter, he will use his time to learn as much as possible to one day emulate his architect heroes Norman Foster and Zaha Hadid.

Arts Emergency is an award-winning mentoring charity and network. Their mission is to help marginalised young people overcome barriers to participation and success in higher education and the creative and cultural industries.

It was set up by comedian, Josie Long and Margate-based campaigner, Neil Griffiths in 2013 as a way to do something meaningful for the young people most affected by rising tuition fees and cuts to the arts.
From a grassroots project in Hackney with eight students and a handful of volunteers, Arts Emergency is now a community of 7,000 professionals from the creative and cultural industries who have pledged to pass on opportunities and support to less privileged young people. Since they registered as a charity in 2013 they have provided expert mentors, work experience and free cultural activities to over 750 young people.