Tuesday, November 16, 1920, is a very important date in the history of St Saviour’s Church in Westgate for it was on that date – 100 years ago this month – that the Bishop of Dover dedicated the War Memorial Chapel in the church.

The new chapel (replacing the former Lady Chapel) had been erected at the end of the Great War 1914-18 as a memorial to the men of Westgate who had fallen in that war.  The dedication ceremony took place at 6pm with seats reserved for the relatives and friends of the fallen men.  A special invitation to attend the ceremony was also extended to ex-servicemen and representatives of the Ambulance Corps, the Fire Brigade, members of the Parish Council, and members of the Special Constables.

Representatives of the Comrades of the Great War also were invited and attended the ceremony.  A report on the ceremony printed in a local newspaper described the Chapel as: “the work of Messrs Morris & Co, of George Street, Hanover Square, London.  It consisted of an artistic oak altar with a curtain of blue and gold surmounted by oak carving.  A beautiful tablet of brass and oak and bears the names of 77 Westgate men who fell in the war.” 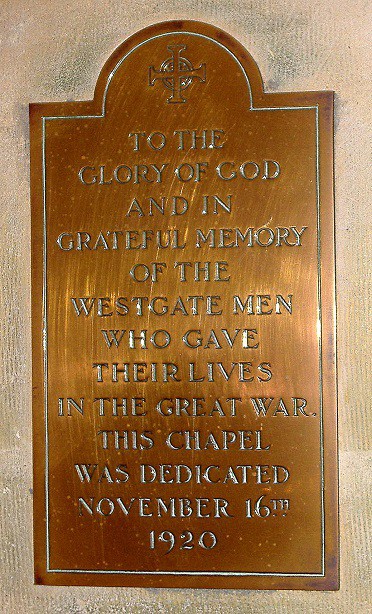 The paper also reported that the Bishop and clergy proceeded from the vicarage (then on the corner of Ivanhoe Road and Westgate Bay Avenue) led by Boy Scouts and Girl Guides and entered the church by the West door.

During the ceremony, the names of the 77 men commemorated on the tablet were read out and a number of wreaths were laid in the chapel.

The following morning, celebration of Holy Communion took place at the new altar when many of the relatives of the departed were present. Subsequent to the dedication ceremony and the unveiling of the tablet, a number of memorials in memory of individual men were given to the church to go into the chapel.

In later years, a brass tablet listing the names of those men who fell in the Second World War was added as were the Rolls of Honour listing the names of those men who had served their country during the Great War.  Those important Rolls of Honour were discovered hidden behind the organ by Dr Dawn Crouch earlier this century.   They were promptly framed and duly affixed to the wall below the brass-and-oak tablet listing those who fell in the Great War.

Early in 1917, four War Shrines (sometimes referred to as Street Shrines) had been erected in different parts of Westgate each listing the names of the Westgate men from that part of the town who were serving their King and country.   At the end of the war, there was an attempt to maintain these War Shrines but they had served their purpose and, despite the best endeavours of the Revd Pendock Banks (the Vicar of St Saviour’s Church), it would seem that the new tablet in St Saviour’s Church was regarded as a suitable replacement for the War Shrines.

It was around this time that the townsfolk agreed that a recreation ground in Lymington Road should serve as the town’s war memorial.  However, within three years, it was decided that the town should have a war memorial cross which would serve as a focus for remembrance services each Armistice Day anniversary and so the war memorial on Sea Road was erected.

The War Memorial Chapel has a very special place in both Westgate’s history and the history of the church.  It is largely due to the endeavours of Dr Dawn Crouch over the last three decades that the chapel is now regarded as such a special place.

When Dawn was churchwarden she made a special study of all the war memorials in the chapel and her interest in them has not abated over the years.  It is thanks to Dawn’s endeavours that the chapel is as important today as it was when it was dedicated 100 years ago by the Bishop of Dover.