A 57 year journey has reached the end of the road for Brooksend garage boss Alan Baker and wife Pam as they retire from the business.

Alan and Pam, from St Nicholas-at-Wade and business partners Paul and Teresa Corbani have now sold the Canterbury Road service station and stepped back from the venture this week.

For Alan it is a significant milestone as he started his career there as a 17-year-old apprentice. 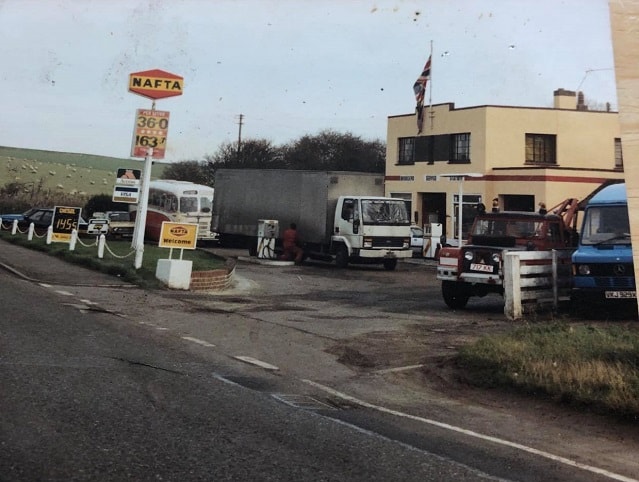 The grandad-of-three, 74, said: “I started with the East Kent Bus company when I was 15 and moved to Brooksend when I was 17 where I was working on all the old cars like the Austin 7.”

Ten years later Alan’s boss Frank Brown passed away and his wife Doreen asked Alan to run the business, joined by colleague Gordon Johnson. By 1987 Alan and Pam and partners  from a local building firm bought out the site.

Alan said: “When we bought it we redeveloped it, in about 1990, spending £100,000 and putting a new canopy up, having a new shop and changing all the pumps to self-service.”

The building partners sold out to Mr and Mrs Corbani in 1999 and they remained in business with Alan and Pam until this month’s retirement.

Alan said although the nature of business has not changed much over the years, the introduction of newer cars has meant different working methods.

The dad-of-two said: “The equipment you now need has changed a lot. Before you just used your spanner to repair things but now you have units. But we still got some of the old cars right up until leaving, like the Austin 7s and the Sunbeam Alpines.”

Cars and fixing them has been a lifelong interest for Alan who had his first vehicle aged 12 – another Austin 7 – which he would ride on the field track by his St Nicholas home. He also helped out at a neighbouring garage

He said: “When I got it, it didn’t go but an East Kent chap helped me.” A mishap of turning the vehicle over while driving it with friends luckily did not put him off his future trade.

One of the more unusual jobs for Alan and workmate Gordon took place in the 80s when they were called to an accident on Brooksend Hill.

The car owner turned out to be singer Lulu who had a show at the Margate Winter Gardens.

Alan and Pam, who met on the school bus and became sweethearts at 16, marrying at Minster church in 1966 when they were 20, say they will miss their customers the most.

The couple, who have had to postpone their planned cruise due to the covid restrictions, say they will instead concentrate on maintaining the land by their village home.

Pam said: “We were going on the cruise but obviously will now have to wait and see what happens over Christmas and the Spring.”

The Brooksend garage has been bought by a family business which also owns the service station on the Ramsgate Road going into Sandwich.

They are currently revamping the Brooksend site but it will remain a garage and budget car business with workshops available to rent. The modernisation work is expected to take around six weeks.