In May Westbrook mum Keisha Pile-Gray wrote an emotional account of discovering her then- eight-year-old daughter has a rare cancer that affects blood and bone marrow.

Over the months she has kept on online account of daughter Aurora’s treatment and two weeks ago the family were overjoyed to be given the news that Aurora was cancer free.

But on October 1st their world was again turned upside down when the family were told the cancer had spread to Aurora’s bones and the nine-year-old is now in need of a bone marrow transplant.

This is compounded by Aurora’s mixed ethnicity making it that much more difficult to find a match.

Keisha shares in her own words the struggles the family have, and are, facing and her appeal for people to sign up to the bone marrow register:

Parenting is hard, and that’s not news to anyone. It’s physically, mentally and emotionally tiring, but when you have sick children, all that is amplified. Those who have been following our journey know that this year has been difficult to say the least.

People have asked time and time again how we have coped, but the truth is, we have no choice. Oscar’s seizures have worsened frightening the life out of us since one half of his face now drops, Ada has an urgent referral and 2 night stay in Great Ormond Street next month to see surgeons and endocrinologists, and Aurora now has refractory lymphoma. Honestly, as a family we are struggling.

Two weeks ago, we drove home from The Marsden after Aurora’s reassessment scan of her head and neck and were told that she had a complete response to treatment! Her scans showed she was completely clear of all tumours and we were ecstatic. After five gruelling months of chemo, where we watched Aurora’s body fall apart, we finally had good news. We’d seen her through infection after infection, temperature after temperature, and side effect after side effect, but it had worked. She’d beaten cancer, and she was so excited to tell the world. She called her whole her family to tell them, and it was the first time she got to hug them all. 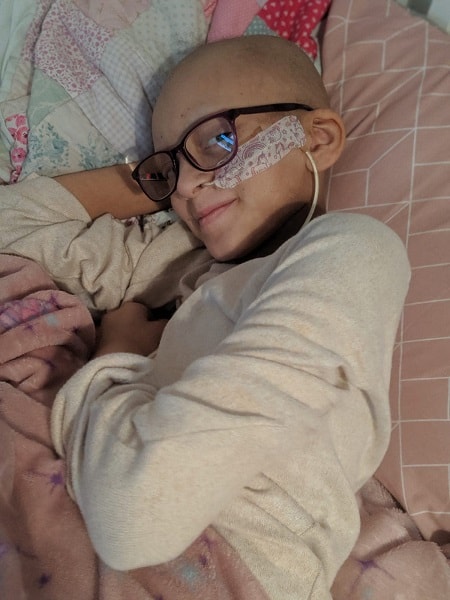 But three days ago, our world was flipped upside down all over again. Her consultant called to tell us that her bone marrow result said otherwise. Not only was she not in remission, her cancer was back with a vengeance, with 40% of her bone marrow being affected, 50% more than when she was initially diagnosed. I had to sit down with our daughter and tell her that not only was she still sick, she was more sick than when she started, and she needed more treatment, including a transplant.

I had promised her that the chemo was making her better. Every time she’d asked me why she was getting more poorly  I told her that this was how it worked, she had to get sicker before she got better, but she would. Every time she asked me if she was going to die, I told her I was right there beside her and she was going to get through it. But I wasn’t prepared for this. In June, her bone marrow was clear, but in the last three months despite still having chemo, it’s returned and run wild in her body. We are honestly heartbroken. Words really can’t describe how we are feeling, to have our whole world torn apart all over again.

Yesterday we met with her consultant and it was like we were transported straight back to her initial diagnosis, but this time the odds had been switched and they were no longer in her favour. In May we were told she had the most treatable form of cancer in children, and that got us through. Through every single hurdle, we kept telling ourselves it’s successful, she will get through it, but now, we don’t have that reassurance.

There are only a small percentage of children that don’t respond to the treatment Aurora has already gone through, and of that small percentage an even smaller percent will eventually go into remission. There is no other option than to give more treatment, but all treatment options require a donor. The first step was for her dad and I to get tested, but they aren’t confident that we would be a match, which means she will most likely have to find a donor from the register.

We’ve been given options, but ultimately, it’s now a race against time.

The standard protocol following refractory lymphoma is a more intense course of chemotherapy followed by a transplant, but given the aggressiveness of her cancer, they aren’t confident that this will be enough. This cancer is vengeful, it doesn’t care that it could take our baby’s life before she’s even had a chance to live! But they told us they want to do better.. they don’t think standard protocol is good enough.

The first alternative means using targeted therapies to try and eliminate the cancer in her bone marrow alongside a transplant. Targeted therapies are said to be the “treatment of the future” when it comes to cancer, but these are new. They haven’t been around as long as the others and so we don’t know the repercussions this could have when she is older. They’ve been effective in other patients, but so had the treatment she’s just had? Her consultant is keen for her strain of cancer to be used in research because it’s aggressive, it’s rare and it could potentially lead to breakthroughs in the future, which we agreed to… but the issue is, they will only allow targeted therapy after two failed courses of treatment. Her consultant has pushed, but it’s not an option yet.

I keep asking, why has our daughter got to fail twice to be worthy of getting the best possible care? But I come up with nothing.

Our only other option is a brand new treatment in the UK. The CAR-T cell therapy. Essentially, this genetically engineers Aurora’s own T-Cells to target specific proteins isolated to her cancerous B-cells. It’s been effective in adults, and is used in America, but it’s not here yet. It will mean her care being transferred to GOSH, but nobody knows when they will be offering the treatment. It’s available for Leukaemia patients, but they aren’t ready to take lymphoma patients just yet, and we don’t know when they will be. We literally feel like we are doing as much as possible to keep her with us until something better becomes available, and it’s not fair.

Before she can even be accepted for the treatment, she needs a donor match lined up, ready for transplant, which is our only hope. Aurora’s life now depends on finding a match on the bone marrow register. 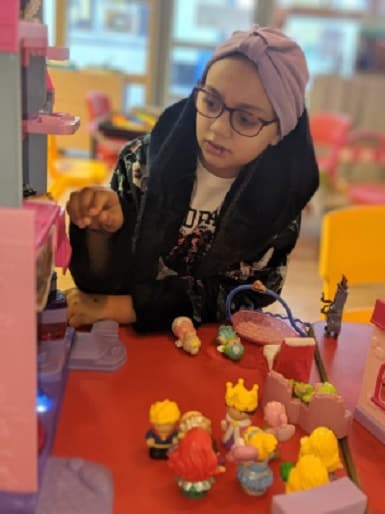 I’m angry, I’m frustrated, I’m scared, but most of all, I’m desperate. I can’t fathom the alternative if we don’t find a match and Aurora suffers the consequences. She’s our baby, and she shouldn’t have to go through any of this. She doesn’t deserve it and I will do anything I can to get her through every single battle she has to overcome.

I don’t have much, (God, I don’t even have my sanity at the moment) but I have a voice, and I will scream from the rooftops to get her what she needs.

I wouldn’t wish this situation upon anyone, and I wouldn’t wish for anyone to walk a mile in our shoes. Please share her story to raise awareness, but also to raise her chances of success.

Matching bone marrow donors is a much more complex process than matching blood type. It relies on matching individual tissue type, and genetic markers that are found on most cells in the body. These markers are used by the immune system as a way to distinguish what cells are supposed to be in the body, and which aren’t. These markers must be as closely matched as possible between host and guest, to prevent the body rejecting the new bone marrow. Everyone’s tissue type is inherited, so often bone marrow donations come directly from a donor with the same ethnic background.

“Currently, only 69% of patients can find the best possible match from a stranger, and this drops dramatically to 20% if you’re a patient from a black, Asian or ethnic minority background”

There is a lack of individuals from ethnic minorities on the register, and as a whole only 2% of the entire UK population is currently signed up to become a bone marrow donor despite having a 1 in 800 chance you would be a match for someone.

Multi-racial individuals like Aurora, currently face the worst odds of finding a donor due to their genetic make up, alongside the lack of availability, which is why it is so important to spread awareness and encourage everyone to sign up. Reach out to those you know with friends in high places, and spread knowledge of how important this is. Not just for Aurora, but for all those people in the same position as her, who are at a disadvantage because of their ethnicity.

Thank you all from the bottom of our hearts for all of the support so far, and please don’t stop sharing #MarrowForAurora

Find Keisha’s account of the family’s journey at https://growingpainspaperplanes.wordpress.com/

Find out how to join the register: