England’s chief medical officer and the chief scientific adviser say positive Covid cases could reach 50,000 a day by the middle of October and 200 deaths a day by November if the growing infection rate is not curbed – however, they were at pains to say this was not a prediction but an illustration of how fast the virus can move if measures to contain it are not taken,

In a public conference today Professor Chris Witty and the government’s chief scientific adviser Sir Patrick Vallance, said positive cases are currently doubling at a rate of around every seven days.

Sir Patrick said: “If, and that is a big if, that continues unabated…there could be 50,000 cases a day by the middle of October and 200 deaths per day by November.”

Sir Patrick said the graph with those figures was not a prediction but illustrated how quickly the virus can move.

According to ONS data some 70,000 people in the UK have the Covid infection and there are now 6,000 new cases per day. Sir Patrick said the figures are not due to increased testing, adding: “We see an increase in positivity of the tests done, so we see the proportion of people testing positive has increased even if testing stays flat.”

Sir Patrick said: “We are in a situation where the numbers are clearly increasing across all age groups.”

The pair say the rate of hospitalisations is also now increasing.

Professor Whitty said: “At first we saw very small outbreaks, then more localised outbreaks that have got larger over time. Now we are seeing this right across a large majority of the country. Anywhere that was falling is moving over and beginning to rise. This is not someone else’s problem, it is all of our problem.”

Professor Whitty said  says the rise has been ‘sustained’ this month and, with winter approaching, “we should see this as a six month problem that we have to deal with collectively.” 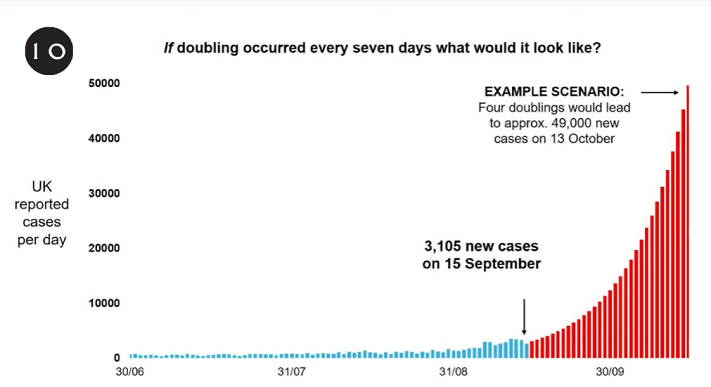 A rise in Covid positive cases has been seen in young adults although they are less likely to end up in hospital. Rates in children have not increased, he said.

He added that the coronavirus was “much more virulent” than flu which accounts for around 7,000 annual deaths.

He said the four main impacts of an unabated spread would be more direct deaths; an overwhelming of the health service; indirect deaths due to resources being targeted at Covid rather than other illnesses and diseases and the social, economic and mental health impact associated with any fresh lockdowns.

The government expects a vaccine to be available to small groups by the end of the year or, more likely, the start of 2021, widening in scope later in the year.

Tougher Covid ‘secure’ measures recently brought into force include a limit on social gatherings of six people and the introduction of fines for those with the virus, or those contacted by Test and Trace, who do not self isolate.

Prime Minister Boris Johnson is expected to hold a public briefing tomorrow (September 21) where any new measures will be announced.

In Thanet the infection rate is now relatively low. There have been 955 cases to date with 6 cases recorded between September 13-19 according to government data.