The RSPCA has launched a petition calling on the Government to release its long-awaited report on  live exports and to bring an end to the trade.

Government has been sitting on the report into current practices and welfare impact when transporting live animals, submitted by the Farm Animal Welfare Committee, for 15 months, without revealing its recommendations.

The RSPCA is calling on its supporters to sign a petition urging the release of the report, and for the Government to act on its recommendations.

It comes as the House of Lords this week did not accept an amendment to the Agriculture Bill which would put an end to the practice of live exports.

David Bowles, Head of Public Affairs at the RSPCA, said: “The Government confirmed they were “actively considering” how to implement their manifesto commitment to end excessively long journeys such as those undergone by sheep and calves exported to the continent.

“As more sheep are exported live next week to France, we urge the Government to release this report which they have held onto for 15 months now and show how they will end live exports, a promise the Prime Minister recently restated in the Commons last month.

“Now it’s time for the Government to make good on these promises. From leaked details, we know the report recommends improving lorry and ship standards and reducing journey times, which would effectively put a stop to live exports from this country, something we have been campaigning to achieve for many years.

“Leaving the EU, this is the best chance we have had so far to end this trade which causes so much unnecessary suffering to animals.”

Shipments of calves and sheep resumed in Ramsgate this month following a pause during the Covid pandemic. Further exports are planned with the first expected at 7am on Monday (July 27) followed by two more  within the week.

Every year thousands of sheep are being exported aboard the Jolene from Ramsgate Port to be driven across Europe for slaughter. Dairy calves are also exported from Scotland to Spain in journeys that can take 96 hours, where they are reared for veal and beef. 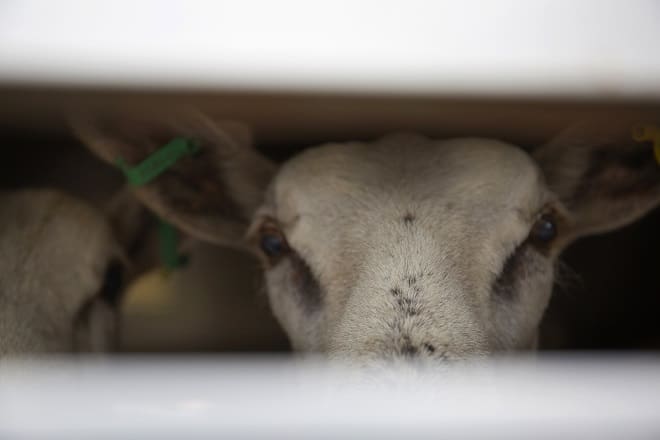 Chris Sherwood, Chief Executive of the RSPCA, said: “It’s unacceptable and completely unnecessary that animals are still being subjected to long journeys to and across the continent, often in stressful conditions with poor law enforcement.

“It’s a fact that these long journeys can cause animals to suffer from fear, exhaustion and dehydration, temperature extremes and lack of food, water or rest, not to mention the fact that we have no control over where they end up, what conditions they are then kept in or how they are slaughtered.

“Now that we are leaving the EU we are no longer constrained by laws which prevent the UK implementing bans on the free movement of goods, including live animals, between EU member states. This presents a real opportunity for the Government to act on their manifesto commitment to improve animal welfare during the long distance transport of farm animals and to see an end to live exports.”

Bringing about an end to the live export of animals is one of several amendments to the Agriculture Bill designed to protect animal welfare.

The Government has also made promises not to weaken or negotiate away animal welfare as part of trade deals, but the RSPCA is anxious to see these promises enshrined in law.

To support the RSPCA’s petition to put pressure on the government to release the FAWC report and act now to end live exports, visit: https://www.rspca.org.uk/getinvolved/campaign/stopliveexports