A disabled mum who also cares for her severely autistic son has been left devastated after vandals smashed the rear windscreen of their family car.

Martina Swift, who also has her seven month granddaughter living at home in Ramsgate, says the vehicle is their main mode of transport which they depend on. “I have to rely on our car because I can’t walk very far, I also suffer with anxiety which has previously had a massive impact and I became agoraphobic for two years.  I’ve only just recently started going back out again,” she said.

She added: “I feel sick to the stomach that someone could actually do this to an innocent person/ family who rely massively on their family car. My boy is 10. I have osteoarthritis in my back, knees, feet, ankles and have carpel tunnel syndrome in both hands. I’m also diabetic (Type 2).

It comes as further reports of cars being vandalised on St Augustine’s Road were shared on social media and Martina says she is worried they may return to cause further damage. She said: “I’ve not slept since it happened because I’m scared they are going to come back to do more damage –  every little noise my heart starts pounding.” 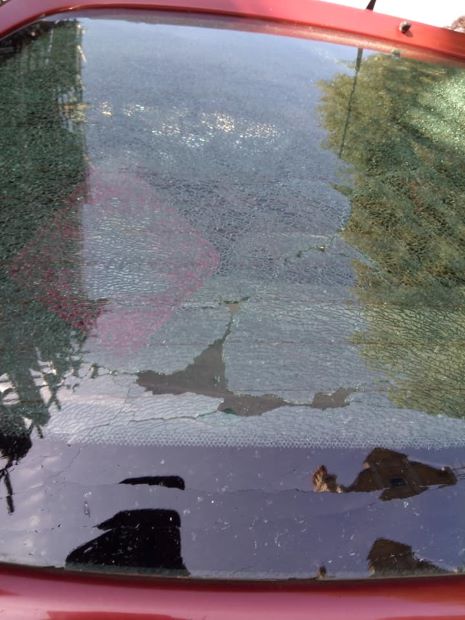 Martina’s husband cares for her and helps with son Kyle who attends Foreland Fields school in Ramsgate. She said: “He loves being in the garden but doesn’t like going to the shops because there’s too many people and the noise, sometimes the lights are too bright for him in some shops he will only go to ASDA. He will go for a walk with my husband and our dogs to the beach but only when it’s quiet. Kyle prefers to be indoors in his own little bubble. He knows he’s safe indoors.”

However, an important part of Kyle’s routine is his trip to a soft play centre on a Sunday which Martina says he loves and  also trips in the family car. “We have to use the car wherever we go because Kyle can’t handle public transport unfortunately so having the car off the road is having a massive impact. He loves going for a little drive,” she said.

The 39-year-old contacted police to report the incident. A spokesman confirmed: “We were called at around 4.10pm on Friday 3 July to a report that the rear windscreen of a car parked in Arklow Square, Ramsgate, had been smashed.