An increase in young people using nitrous oxide – known as laughing gas – and dumping empty canisters on beaches and in parks across the isle has prompted a Broadstairs councillor to call for a targeted public awareness campaign and stricter penalties against those supplying the canisters to people who use them for highs.

Ruth Bailey has written to MP Craig Mackinlay after clearing some 200 canisters from Viking Bay during a beach clean this month. She says she has two main concerns – the harm caused to young people using the laughing gas balloons and the impact on the environment from the canisters left behind.

Groups of young people at Viking Bay and Margate Steps have been spotted using the laughing gas in recent weeks and there have been complaints of the canisters being dumped in areas across the isle including Westbrook’s Sunken Gardens.

Independent Cllr Bailey said: “It has been a problem for a while, not just here in Thanet but all over. I was doing a beach clean a couple of weeks ago and there were groups of young people sitting around, they had drink but were mostly using nitrous oxide balloons.

“They left all their mess and we picked up around 200 canisters, with some of them buried in the sand. I am worried about the harm this does to the young people and the environmental impact with canisters and balloons washing into the sea or being picked up by wildlife.

“Professionals are calling for stricter measures as this is a craze that appears to be growing exponentially while the conviction rates are actually decreasing year on year.”

Legislation introduced in 2016 made it illegal to sell the gas, also known as ‘hippy crack’, for psychoactive purposes. But Nitrous Oxide has legal medical uses and is also sold in catering shops to produce whipped cream – making its circulation harder to control.

In December 2018, a former Chief Crown Prosecutor said the new law had failed to stop the supply and described the product as ‘death in a box’.

Silver canisters of the gas are dispensed into balloons for inhalation. It can cause euphoria and of makes people become giggly and can hallucinations.

Risks include breathing problems when a large amounts of gas is inhaled, it can also cause burns due to coldness if inhaled directly from a canister or anaemia and nerve problems due to vitamin B12 deficiency associated with heavy use.

Side effects can include headaches, dizziness and bouts of paranoia. If too much is taken a person can risk falling unconscious and/or suffocating from the lack of oxygen. People have died this way. 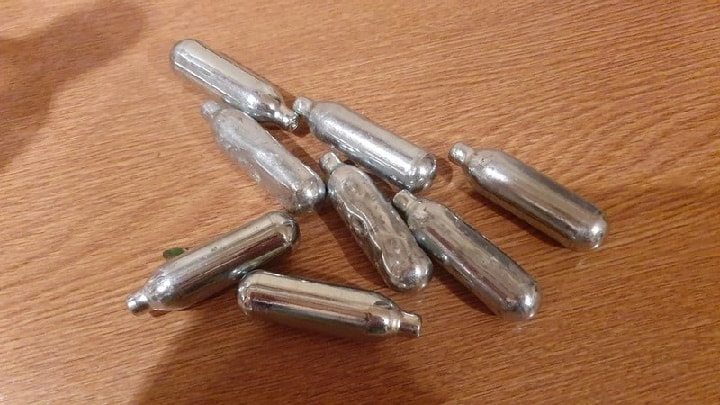 According to government statistics, the inhalation of nitrous oxide resulted in the deaths of 25 people between 2010 and 2016.

It is the second most commonly used drug among 16- to 24-year-olds in England after cannabis.

It is an offence to supply nitrous oxide for its psychoactive effect, for which there is a maximum sentence of seven years’ imprisonment.

Cllr Bailey’s letter was passed to Policing Minister Kit Malthouse who responded to say legal measures are in place to tackle sales made for recreational use and there are penalties for littering that can be used by councils against those dumping canisters.

Cllr Bailey said: “The purveyors of these canisters must recognise that their sales have gone up exponentially and that it must be for nefarious reasons.

“There needs to be a targeted public awareness campaign and stricter prosecutions for those selling these canisters for recreational use.

“It is fine to say that the local authority bears the responsibility for clearing up the resultant litter and issuing on the spot fines but this is something that should be stopped at source and the only way to do that is  through restricting the sales and coming down hard on those exploiting youngsters in this way.”

Last year at the Royal College of Nursing annual congress a call was made for an awareness campaign of the dangers associated with laughing gas. A petition has also recently been raised asking for a ban on the sale of nitrous oxide to the general public.