“I don’t know how long I have got left. I have been trying to enjoy my last moments but now it’s time to share my story and raise some awareness, “ says Ramsgate mum-of-four Sarah Olsen.

The 48-year-old has cancer in her lung and liver and is also suffering the painful effects of Cushings syndrome. She has been told her condition is terminal.

The former St Lawrence Domestic Services Team leader had beaten lung cancer last year but a routine check up this February discovered the disease had returned.

The Covid lockdown measures from March 23 meant Sarah was not told the news until April 24.

She said: “On April 11 my body started to swell up all over. I couldn’t see anyone as I am listed as vulnerable because of the cancer so I could only make phone calls.

“Then on April 22 my neck was so swollen I was struggling to breath and had to get an ambulance. Two days later I got the results back and was told the cancer was in my lung, liver and abdomen. They said I couldn’t have an operation and would have to have chemo and radiotherapy. I needed a liver biopsy and pet scan to then make a treatment plan.” 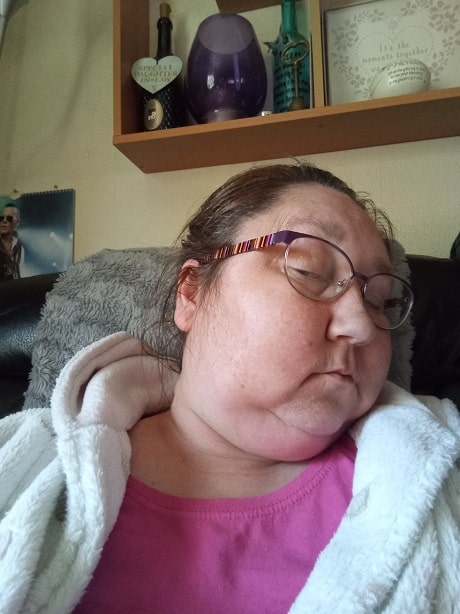 On May 3 Sarah was again struggling to breathe, her face and neck were swollen and her vision, balance and speech were all affected. A trip to A&E resulted in a scan, blood tests and oxygen and then Sarah was sent home due to the covid risks at the hospital.

By May 13, after a serious fall,  biopsy, scan and blood tests Sarah was admitted to the Clinical Decisions Unit at QEQM Hospital in Margate.

Sarah said: “The next day I had a brain scan and they told me I had Cushings syndrome which had brought on diabetes. They also said my blood sugar, which should have been between 6-8, was measured at 30 when I was admitted.

“Then a man from the cancer department came to see me and said because of the time delays they could only prolong my life with chemo and radiotherapy. not cure or shrink the cancer.

“I was devastated. I went home on May 15 and tried to get my head around all this but my anxiety has been through the roof.

“I keep thinking if there had not been the delays then it might have been different but covid slowed everything down.

“My emotions are up and down. Sometimes I am perfectly calm but then my face and neck swells, I can’t talk, my brain functions get slow and it is really frustrating.”

Although Cushings has only recently been diagnosed Sarah believes her condition could have been present at least five years ago and was possibly triggered by the lung tumour and lobectomy operation to remove it at Guys Hospital in London last year.

Cushings is uncommon. It mostly affects people who have been taking steroid medicine, especially steroid tablets, for a long time.

Very rarely, and in Sarah’s case, it can be caused by the body producing too much cortisol. This is usually the result of a tumour.

Symptoms include increased weight, face swelling, bruising and depression. The condition has also brought on diabetes and problems with eyesight.

Sarah said: “I didn’t know anything about Cushings, it was all about the cancer. I wonder why it wasn’t picked up for so long. At least I’ve now been given some special medication from the doctors that should help control the swelling around my face.

“It all makes me a bit wobbly so I need help. I have my partner Stewart and my daughter Luanna and son-in-law Marcus have been helping with cooking and shopping and stuff.

“I have to involve the family more now but  I was just trying to enjoy that last bit before looking this all in the eye. I can’t do this on my own though.”

Sarah is now due to start her chemotherapy course as an outpatient, meaning she is at home with her family between appointments. Specialist equipment for the home has been provided by QEQM Hospital.

The nan-of-four, who is still waiting for a months-old application for PIP (Personal Independence Payment) to come through, says she now faces the complications of buying her Prestedge Avenue home so Stewart, her partner of 26 years, and her family have some security in the future.

She said: “We have brought our family up here and Stewart won’t want to have to leave when I am gone. I am so proud of my family and I would be happy knowing they are secure, it’s all I want really.

“I want to leave something useful, I don’t want this all to be for nothing.”

Luana has now raised a Gofundme appeal to help her mum carry out her last wish of buying the family home. She said: “My parents have built their lives together in this family home, they have raised their children in that home and now their grandchildren too.

“Mum’s last wish, the one thing she would love to achieve in her life, would be to buy their home so she can live the rest of her life knowing that she will leave her family some stability and security and they can carry on living in their family home and remember the years they all had together and cherish every memory.”