The coronavirus pandemic has had a huge impact on the number of people needing to claim out of work benefits with Thanet having the highest benefit claimant rate in Kent – and the highest in the south east for those aged between 18 and 24.

Data from Kent County Council shows the rate of unemployment claimants in Thanet in April had rocketed by 56.5% and now stands at its highest since September 1996 – as does the rate for the entire county.

In March there were 4,630 Jobseekers or Universal Credit claimants recorded on the isle. By April this number had grown by 2,615  to 7,245. This represents 8.9% of Thanet’s working population compared to 5.7% in February and March this year – the highest amount recorded in over 20 years.

Documentation from KCC says: “COVID-19 has had a significant impact on the number of claimants of unemployment benefits. The claimant rate in Kent is currently 5.1%, the highest it has been since Autumn 1996. Kent has seen a higher percentage increase over the previous month than was seen nationally.”

At ward level Margate Central is hardest hit with 17.5% of its population claiming jobseekers or UC – a rise of 200 people from March. In Cliftonville West the rate is 15% and in Dane Valley it stands at 12%. 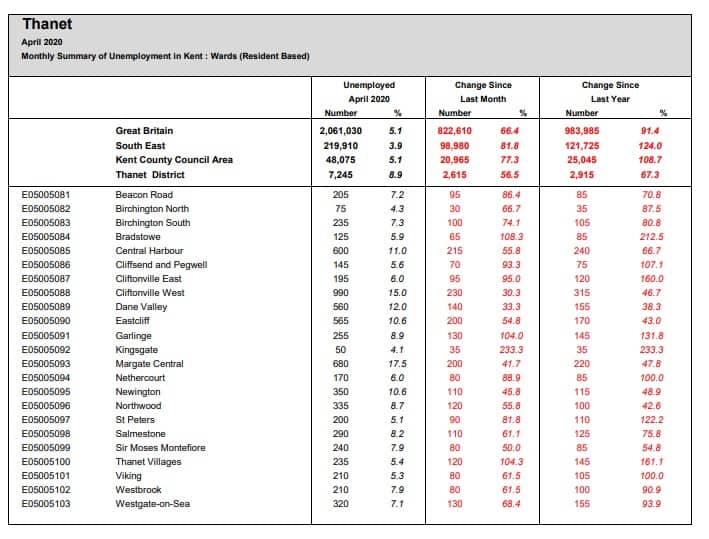 The claims in many cases are as a direct result of the covid crisis and the shutdown of businesses, particularly those from the leisure and hospitality trade and retail, have had a huge impact. The numbers do not include people who have been furloughed.

Tourism is worth some £320 million per year to the local economy and supports, directly and indirectly 7,950 jobs.

The vast majority of the isle’s businesses are small, employing less than 10 people.

Although some have been able to continue with takeaway services and others will be eligible to reopen from June 15, if measures are in place to reduce the transmission of coronavirus, yet more will not be able to open until after July 4.

And for some, such as Dreamland, large gatherings will mean many of the year’s events will remain cancelled, exacerbating the impact on local employment and income for Thanet businesses.

David Foley, chief executive of the Thanet and east Kent Chamber of Commerce. Said: “The claimant count figures released on May 19 reflected the first effects of the pandemic. Thanet again topped the list in Kent at 8.9% with 7,245 unemployed across the district, a rise of nearly 3,000 since this time last year.

“More worrying perhaps is the data for 18 to 24 year olds which shows the highest youth unemployment rate in the south east at 13.6%. It is almost three times more difficult for a school leaver to find employment in Thanet than in Sevenoaks.

“These figures illustrate again how important it is for Thanet District Council and other public bodies to use their discretionary funds to support the businesses and training providers that are best placed to stimulate our local economy and produce the funds that ultimately support every public service, including our cherished NHS.”

Nationally, in April 2.1 million people claimed unemployment related benefits. This was an increase of over 850,000 claimants from March.

Thinktank, the Resolution Foundation said in a report this month: “The economic fallout from the coronavirus has taken the UK into uncharted territory.

“While the health sector has gone into overdrive, other large industries ranging from nonfood retail to hospitality and travel have been deliberately shut down, resulting in sharper rises in unemployment, and steeper falls in job vacancies, than occurred even during the 2008-2009 economic crisis.

“The recovery will not be straightforward: restrictions are likely to persist in many sectors, and many businesses will struggle to survive.

“While the realities of being unemployed are damaging in real time – potentially putting health, well-being and security at risk – the experience can also scar a person’s employment and pay for years to come.

“This is particularly worrying for young people, who are more likely to experience unemployment during a downturn, and who have their whole working lives ahead of them.”