A cheeky look at Thanet has been published in the form of a new book by Westgate author and photographer Peter Checksfield.

The 57-year-old, who has written four previous books on music including a guide to The Beatles on TV and video, has created Thanet Revealed containing shots around the isle featuring nude models.

Snippets of social history accompany the black and white images which were taken over a ten year timeframe between 2004 and 2014.

Peter had been planning to travel over the Spring and Summer but the coronavirus lockdown made this impossible so he started on the Thanet Revealed project. 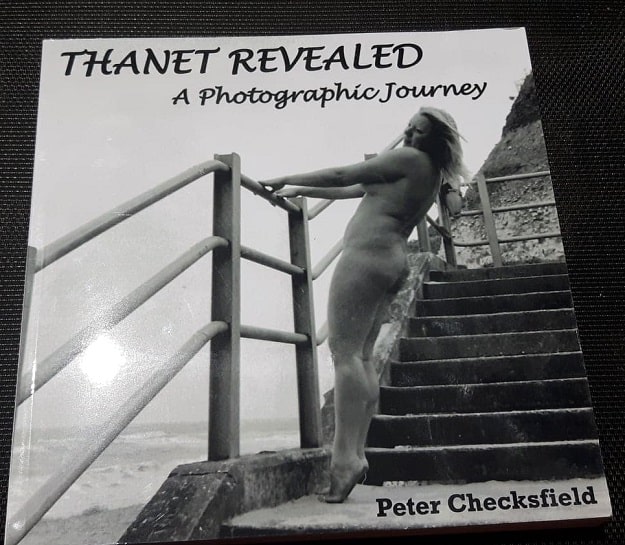 He said: “A couple of years back, I decided to follow my dream to be an author, and I’ve so far written four acclaimed books on music (click here for example, with reviews from ‘Record Collector’, ‘Mojo’, ‘The Beat’.

“My last book ‘Let’s Stomp!’ took me almost a year of very hard work, so I planned to have much of the spring and summer off, travelling with my partner Heather as we’re both keen walkers… then the lockdown happened!

“During the decade or so from 2004 to 2014, I photographed much of Thanet, often featuring nude, mostly local, models in the photographs. Not ready to start a new music book project, I decided to look through thousands of half-forgotten old negatives and photos from these years, putting together ‘Thanet Revealed’.”

The book, described as part photo, part local history and part tour guide, takes a trip around Thanet’s towns and villages, as well as straying into Preston and Stourmouth.

The 170 page book features 80 photos and costs £20 inclusive of postage. It can be bought directly from Peter by emailing  peterchecksfieldauthor@gmail.com