Thanet still has the highest rates of child poverty in Kent – with almost a quarter of the isle’s youngsters deemed to be living below the breadline.

The data for 2018/19, compiled by Loughborough University on behalf of coalition End Child Poverty, says the figure stands at 24.7% – a hike of 4% since 2014 and 1% higher than last year .However, these figures are based on family income before housing costs. Last year there was also a breakdown of how families were impacted after housing costs – showing Thanet as having 35% of 16-year-olds and under living in poverty – but changes to the way data has been collected means no comparable figure has been published this year.

Data for those in poverty before housing costs shows more than 8,000 youngsters are living in families whose income is 60% below the median income – the indicator used for living in relative poverty.

Figures from the Department for Work and Pensions for children in ‘relative poverty’ households* shows Cliftonville West is the most affected area with more than double the number of struggling families with children compared to other wards, with 1,152 recorded. The next highest number is in Dane valley at 833 and then Ramsgate’s Eastcliff at 586.

The End Child Poverty coalition is calling on the Government to take seriously how the steady four-year rise in child poverty – predominantly in working families – has pushed people to breaking point. They want ministers to commit to an ambitious strategy to end child poverty in the aftermath of Coronavirus. which campaigners fear will only have deepened the problem and drawn more families below the poverty line. 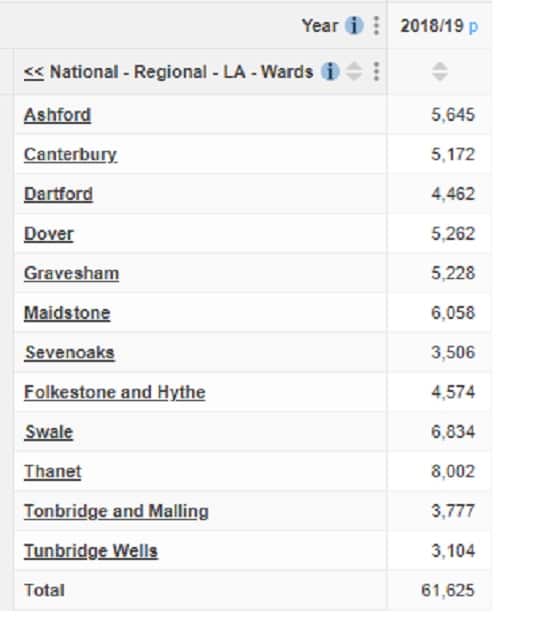 A recent ONS analysis, carried out 17-27 April 2020, shows just under 1 in 4 adults (23%) said the coronavirus was affecting their household finances. The most common impact in this group was reduced income (70%), with nearly half saying they had used savings or borrowed to cover living costs.The coalition, working with researchers at Loughborough University, has published a new analysis of Government data that documents how child poverty rates in many different areas across Britain have swelled over the last four years, even before housing costs are taken into account.

Campaigners are fearful that the added impact of Covid-19 on household budgets could push struggling families over the edge and are urging the Government to immediately increase the amount of money in families’ pockets.

County councillor Karen Constantine said: “It’s extremely disappointing and worrying to see again that Thanet‘s children are the poorest in Kent. As a Ramsgate County Councillor I raise this issue frequently at Kent County Council.

“On one occasion a Conservative councillor spoke to me to say he hadn’t really believed what I’d been saying and had checked the statistics. He was shocked. I’m going to continue to request KCC to look much more closely and to identify a clear action plan to reverse this trend. We need a select committee formed to look at this in detail, to develop a clear plan to tackle this.

“We are now also seeing unemployment growing in our Thanet. I fear that Thanet’s child poverty is only to get worse. We need our County and national politicians to take urgent action. Let’s be in no  doubt that child poverty scars lives well into adulthood.”

‘Not all in the same boat’

Anna Feuchtwang, Chair of End Child Poverty and Chief Executive of the National Children’s Bureau, said: “We may all be experiencing the storm of Coronavirus together, but we are not all in the same boat. The government’s data shows the extent to which over the past four years, children in low income families have been cut adrift and are already experiencing unacceptable hardship through cuts and freezes to the benefits system.

“Our country’s children are now at severe risk of being swept deeper into poverty as a result of the pandemic and lockdown. This is why we are asking the government to strengthen the social security system which is there to hold us steady during tough times, by immediately increasing household income for those least well-off.”

The coalition is calling on the Government to set out an ambitious strategy to reverse the increases and make ending child poverty a priority for the nation’s future economic recovery.

Buttle UK, part of the End Child Poverty Coalition, is an organisation that provides Chances for Children grants to some of the most deprived families in the South East.

Their research says a staggering 41% of grant referrers anticipate working with even more families who need financial support as a direct result of the Covid-19 crisis. The impact is already being felt with a 76% increase in applications for grants in April alone, compared to figures for the previous year. Activities/ toys and laptops were the main items grants were being applied for by families in lockdown.

Buttle UK are fearful that the added impact of Covid-19 on household budgets could push struggling families over the edge and are urging the Government to prioritise these families in their plans.

Joseph Howes, CEO of Buttle UK, added: “Admidst the stress, uncertainty and pressure of the coronavirus pandemic, now more than ever, it is important to recognise that child poverty is rising in the South East.  The added impact of Coronavirus, in the South East and across the UK, has caused a national emergency.

“These families are at breaking point and further austerity measures will simply tip them over the edge.  Child poverty was here before the outbreak, and we need to make sure it is not forgotten about – or made worse – as recovery begins. ”

* The dataset is based on a ‘before housing cost’ (BHC) estimate of relative poverty. This measure takes no account of the effect on disposable income of some households having to pay a lot more in rent or mortgage payments than others.