A new chapter in the long running saga of the development of Pleasurama on Ramsgate seafront appears to be starting with advertisement for apartments at the site by Blueberry Homes.

Last year significant control of the company which owns the freehold of the site was taken over by local businessman Martin Rigden.

According to Companies House Mr Rigden, a director of Blueberry Developments, took control of Ramsgate Development Company on March 19, 2019.

Blueberry Homes is responsible for high-end developments such as luxury apartments Ravello Broadstairs and Barletta Broadstairs. 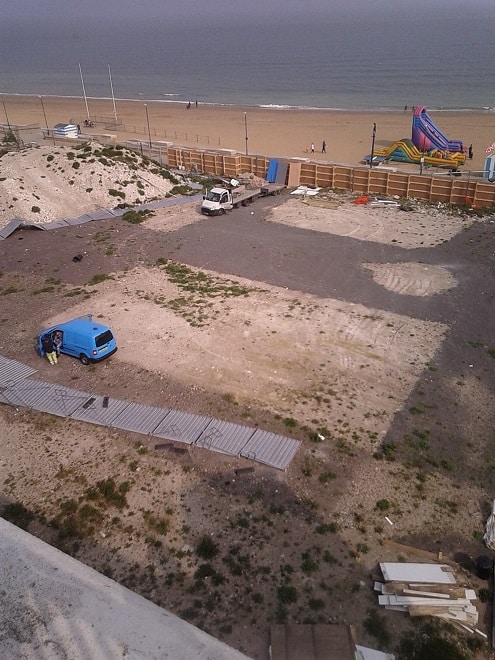 A £3.4million charge on the site was paid in January this year – meaning the title to the derelict site comes under the sole control of Mr Rigden. The two now-cleared debts were owed to Panama-based firm Mintal Group.

Accounts for the Ramsgate Development Company filed up to March 31 2019 show accrued debt of £11 million, up from £9.8 million the previous year. What that debt is made up of is not shown although a loan amount of £6.4 million remains out of the £9.8million listed for 2018. Loans are secured against work in progress.

The plot has been empty since a fire in 1998. but the development is now being displayed on the Blueberry Homes website for 100 one, two and three-bed apartments, new beachfront shops, leisure, retail outlets and a hotel and gym.

FP said it was unable to secure the necessary funds to complete the scheme under the existing development agreement.

The firm was renamed Ramsgate Development Company Ltd and the registered address changed from Essex to Cliff Street in Ramsgate,.

Documents on Companies House revealed two people with ‘significant control’ of the Ramsgate Development Company as Colin and Robbie Hill.  They are involved with the Panama-based  Mintal Group, which had the £3million charge on the seafront site.

The last contract with Thanet council stated the project must be completed within three-and-a-half years, which would have implied a date of January 2020  if taken from contract completion. However this date has been and gone.

Stipulations within the contract mean if it is not developed then the council has an option to buy it back. It is not clear what sum TDC would need to pay, the £3.5 million the freehold was sold for, the £11million accrued debt or the market value of the land which, if developed, could potentially exceed £30-40 million.