Jo, 84, believed in working quietly with dedication, and was renowned for her work at Broadstairs Healing Centre which she founded in the early 1990s.

A therapy teacher and lecturer, she studied under Winifred Durrant, whose brother Harry Edwards was the founder of the healing movement. American psychiatrist and medical practitioner, Dr Lisa Sand, and German medium/ healer Inga Hooper, who achieved world fame for their ‘soul directed therapy’, tutored her.

She founded her centre at a time when most were sceptical about healing as a therapy. She said: “It took a lot of courage to publicly state I was a healer at a time when we were still regarded with suspicion and sometimes hostility.”

A member of the Kent Healers Association and the National Federation of Spiritual Healers, and latterly the Kent International Healing Association, she campaigned for years to ensure that practitioners were properly qualified, ensuring her team undertook lengthy, involved, professionally-run rigorous courses.

Her centre, first run at Park Hall in Pierremont Park in Broadstairs, and then from a clinic at her home in the town, dealt primarily with soul directed therapy, a  treatment that dealt mainly with post-traumatic stress disorder which she believed was  a main contributory factor to physical, emotional, mental and spiritual disorders and their many and varied symptoms. 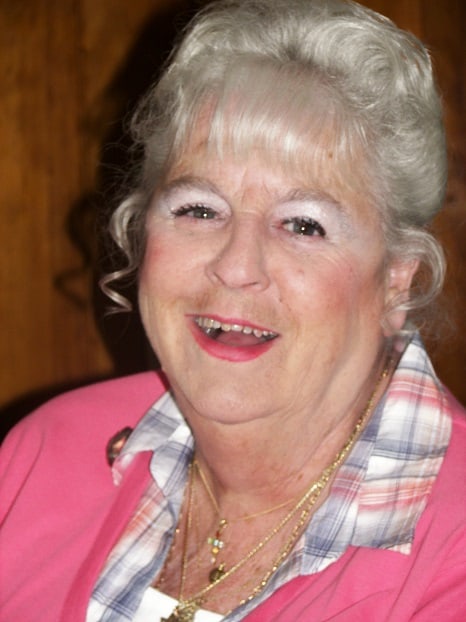 Qualified staff at the clinic also offered a variety of treatments including counselling, reflexology, Indian head massage, therapeutic body massage and hypnotherapy. It was a recognised training centre for future therapists, and the venue for a variety of workshops and counselling sessions.

Jo was adamant that patients refer themselves to their GP if they there was concern with their condition. Her adage remained: “We work alongside the medical profession and not instead of it.”

Her dream to see healing therapies become accepted and available on a widespread scale came true during the last 20 years with a range of clinics and workshops opening throughout the UK and expanding hugely through the Internet. Her ultimate wish was that every hospital and doctor’s surgery had the services of a permanent holistic therapist.

A skilled and patient lecturer, Jo was invited in her capacity as a recognised authority to contribute to television and radio debates about healing, and had her own local radio phone-in healing help show.

She also recorded a number of well-received meditation self-help tapes and set up one of the first healer websites in the county.

She was involved at the launch of the healer-doctor partnership in the UK and was invited by a consultant anaesthetist to join his pain management clinic as holistic healer.  Her team exhibited and gave demonstrations at the Mind, Body and Spirit event at London’s Olympia, and she was involved with a number of local similar events. 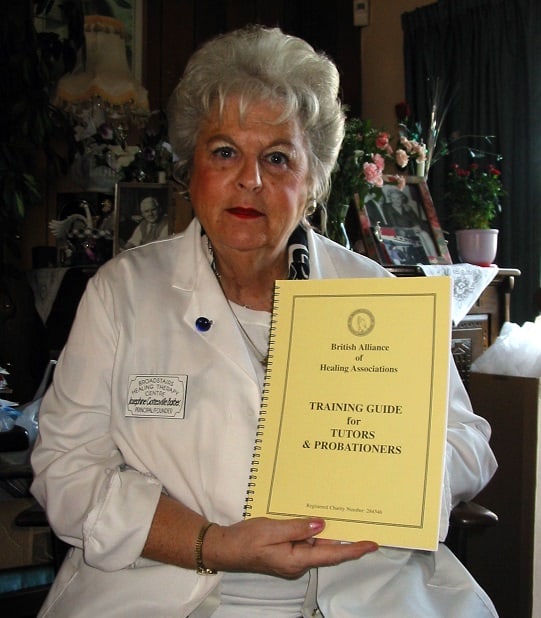 She was a great supporter of charity and held a range of fund raising events at her home including her Derby Day Flutter on racing’s Epsom Derby Day in June; she also helped raised funds for the special care baby unit at the QEQM Hospital in Margate and her centre donated parcels and gifts to the local women’s refuge at Christmas.

A huge music fan, in her early life in London she was a dancer and then worked in music publicity and promotion in and around the capital. Her cousin was legendary jazz musician Ronnie Scott and she was also friends with top jazz players including legendary drummer Phil Seaman.

Her life in music and show business continued and expanded when she married acclaimed conductor, composer, musician and band leader Frank Barber who recorded music for television and film, shows and recording artists of the time including Sammy Davis Jnr, Max Bygraves, Lenny Henry, Anita Harris, Dana and Gilbert O’Sullivan.

Lesley Green, secretary of Kent International Healers, is a former student of Jo’s and subsequently worked with her at her clinic and now independently as a registered counsellor and healing therapist.

She said: “Jo had a huge influence on many people through her work and her teaching. I am sure I speak for many when I say that her passing leaves a huge emptiness in our lives.

“She successfully taught many of us; in my case her wisdom helped inspire me and through me, my daughter and granddaughter onto a similar pathway.”

A spokesman for former members of her healing group said: “Jo was kind and caring, extremely professional and highly engaged in her work. She was a pioneer and a determined believer in regulated healing therapy as a viable platform in conjunction with the medical profession.

“She was held in high esteem by friends, colleagues and patients. Those who learned so much from her and her teachings will continue her high standards and compassionate work.

“She always taught that being true to yourself, the love of life and laughter were paramount – that is her legacy.”

A memorial celebration of her life and work will be held at a date to be arranged.

Tribute with thanks to Peter Barnett