A family from Broadstairs has shared these pictures with The Isle of Thanet News of an interesting discovery made while they were out exercising this week.

During a walk in Stone Bay they came across a 10ft piece of driftwood covered in what they think are gooseneck barnacles.

The mum said: “We’re obviously all in a really tricky time at the moment where we don’t want to be encouraging gatherings in any way but are also hopefully are managing to get out for our daily bit of exercise. 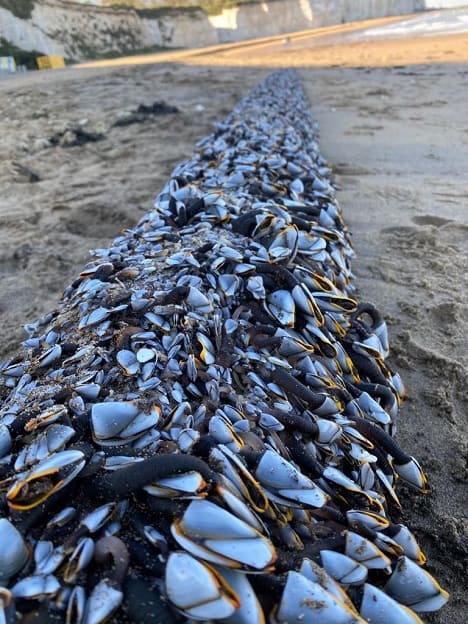 “I just wanted to share some pictures from our walk along Stone Bay of a huge – over 10ft long – piece of driftwood covered in hundreds, maybe thousands, of gooseneck barnacles.

“I looked it up and they are found in tropical climates but sometimes get caught in the North Atlantic Drift.”

Gooseneck barnacles, also called percebes, are crustaceans that cling to rocks in places that have a strong crashing surf. In Spain and Portugal, they’re considered a rare delicacy, thanks to their sweet flesh, which tastes a bit like a cross between lobster and clam.

Have you found something interesting while out walking during this time of restrictions on public life? Send you pictures to isleofthanetnews@gmail.com