The horror stories of rogue tradesman doorstepping vulnerable people and the elderly are commonplace.

However, this can also provide a false sense of security as Thanet couple Meegan Bradley and Harriet Jordan-Wrench discovered.

Meegan, who runs and teaches Hotpod yoga in Margate, says they hired a tiler on the basis of recommendations received on the group.

But just days into the project they became increasingly  concerned over the workmanship and rising costs. Meegan explained: “There was no sealant applied to the shower area whatsoever and tiles were stuck straight on plaster.”

Money was requested up front for materials and they say they were pressured into advancing the builder’s wages with stories of sick family members. At one point Meegan says she was cornered into the kitchen as he begged for cash.

Despite their misgivings they decided to allow the work to continue hopeful they would still have a new bathroom but this was to prove disastrous. She explained:  “In our naivety we decided to trust this man and let him work on the bathroom while we went away to visit family, he promised we would have a bathroom on our return (it had been six weeks already). We returned from our trip and we were no further along than when we left. We engaged the opinions of new workmen who said  it was the worst job they’d ever seen.” 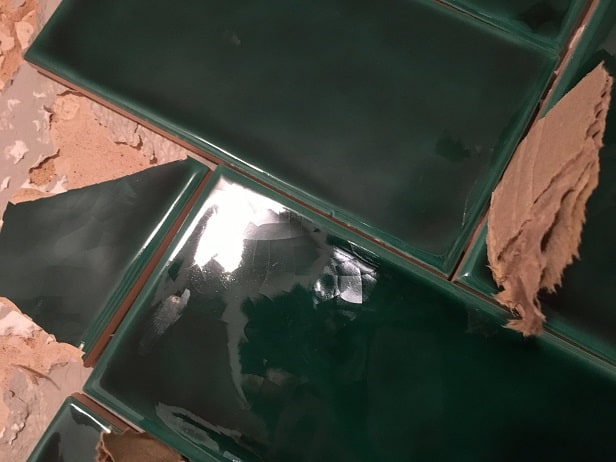 There was further bad news as further inspection revealed only half the tile area spacers were used with the rest being filled with cardboard. In some places there was nothing and the tiles were touching. No sealant was put around the shower meaning it would have leaked as soon as it was turned on

Meegan says they have learned a painful lesson after the work had to be completely re-done. She said: “The tiles were expensive and have all had to be ripped out in order to start again. This, in addition to his fee, has cost us a total of £1,500 and six weeks without a bathroom. We have learnt a painful lesson in trusting people to do what they say they can.”

A spokesman from Kent Trading Standards said: “We advise our communities to ignore cold callers and, if you definitely need work done, it may help to seek the opinion of friends and family members. However, recommendations on social media may not always be trustworthy, so our advice is always to get several quotes for the work.”

The authority confirmed that between 30/09/2018 and 01/10/2019 there were 26 doorstep crime incidents in Thanet but are keen to stress they suspect the levels to be much higher as it is notoriously unreported.  They further informed  The Isle of Thanet News they will be,  “reviewing and co-ordinating the safeguarding functions with aforementioned partners – Kent Police, the Kent and Essex Serious Economic Crime Unit and district councils” in their fight to protect the public from scamsters.

A spokesman added: “Doorstep crime continues to be a threat to vulnerable adults living in Kent. Organised criminal gangs pose as legitimate businesses with the sole aim of defrauding people of their hard-earned savings. “hey target the socially isolated, the infirm or the unaware. At first they appear professional and friendly but often turn nasty when the scam intensifies.”