Little ones at Callis Grange Nursery and Infant School in Broadstairs are among the first to see the latest car which will hit the Kwik Fit British Touring Car Championship grid this season with Thanet’s Michael Crees behind the wheel.

The Honda Civic Type R FK8 is part of the BTC Racing stable. Michael will be part of a three-pronged attack from the Brackley-based outfit this season, with the 36 year old set to benefit from working alongside two experienced, front-running team-mates; former BTCC Independents’ champion Tom Chilton and five-time race-winner Josh Cook.

But ahead of the season opening at the end of this month the dad-of-two, whose son Hugo attends Callis Grange and daughter Bonnie is due to start this year, took the vehicle and tour truck to the Beacon Road school for pupils to see. He also gave an assembly to infant children and BTC Joint Team Principal Bert Taylor gave the little ones a look inside the team truck. 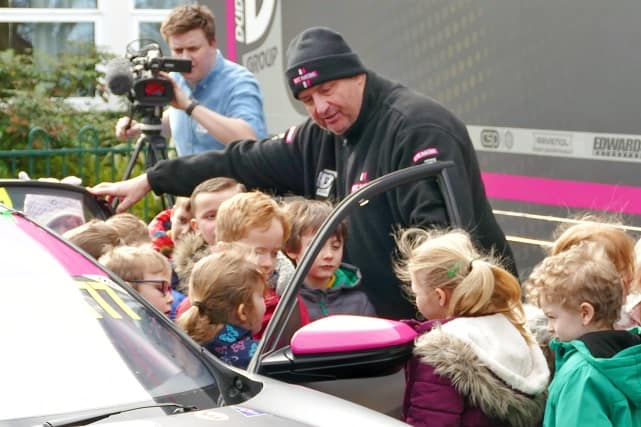 Michael, who was joined by wife Jodie, has become one of the UK’s top 30 touring car drivers in less than five years of competing.

The locally sponsored, former Charles Dickens student said: “I thought this would be something nice just before the start of the season, something inspirational for Callis Grange. It raises awareness and puts Broadstairs on the map.”

Head teacher Alison Marshall said: “As a school we try and provide memorable experiences and to inspire them to see if they work hard and practice, take advice and learn from others, they can achieve their dreams.

“You could see when Michael talked to them they were totally in awe. Michael is a parent here and shows other parents they can share their experiences with us.”

BTEC team director Richard Tait-Harris added: “Michael is from Broadstairs and we are very supportive of our drivers and keen as an all inclusive team to see our young fans to come.”

The 2020 BTCC season will be contested over ten events. Starting at Donington Park in late March, it will visit Silverstone, Thruxton, Oulton Park, Croft, Snetterton and Knockhill, before a second visit of the year to Crees’ home circuit Brands Hatch ends the campaign in October.

The latest car will have Michael’s branding added to it ahead of the season start.